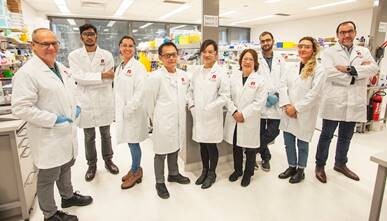 The secret pathway used by some aggressive breast cancers to avoid detection has been uncovered by researchers at Macquarie University, a potential lead to more effective treatments for metastatic breast cancer.

Around 10% of breast cancers are referred to as ‘triple negative’ because they don’t rely on oestrogen, progesterone or HER2 proteins to grow, meaning they don’t respond to treatments that target hormones and HER2 protein receptors.

Early detection and surgery remain the most effective treatment, but around one-third of breast cancers metastasise — tumour cells sneak past the immune system to spread to other parts of the body, making the disease more difficult to treat.

Dr Benjamin Heng and fellow researchers from the Department of Biomedical Sciences at Macquarie University have been researching the molecular and biological activity of human breast cancer in Professor Gilles Guillemin’s research group for the past seven years, working with a cancer survivors advisory group to target research where it is most needed.

The findings — published in Breast Cancer Research — could help to slow down aggressive breast cancers and potentially improve survival for people with hard-to-treat ‘triple negative’ tumours.

Dr Heng said that his team has revealed that triple-negative tumours escape the body’s immune response and also get most of their energy by hijacking the kynurenine pathway, a biochemical process that occurs in human cells to metabolise certain amino acids.

“Our bodies naturally try to contain the tumour but we know that breast cancers use a mechanism, like an invisibility cloak, to hide from the immune system and spread,” Dr Heng explained.

“The next step in treatments that can complement the conventional chemotherapy and radiotherapy, which target the cancer cells, are those that can harness our immune system to attack the cancer.”

The research builds on comprehensive work under Professor Gilles Guillemin on the ways that the three major breast cancer subtypes use the kynurenine pathway. It also allows researchers to identify a unique signature for the different cancer types.

“The ability to identify subtypes of breast cancer more accurately means we can use the most effective treatment earlier in the process,” Dr Heng explained.

Dr Heng said that scientists have long known that the kynurenine pathway plays an important role in the production of an essential amino acid — tryptophan — used by the body’s immune system, but the precise role the pathway plays in the spread of cancer has remained unknown.

While extensive studies show that cancer patients have unusually high kynurenine pathway activity compared to healthy patients, only a limited number of studies have focused on breast cancer.

“When the tumour invades a cell, it heads for this pathway and puts it into overdrive,” Dr Heng said.

“Then it sucks all the nutrients out, which helps the tumour grow, and it also produces multiple chemicals that kill the immune cells and let the cancer remain undetected.”

Cancer cells typically keep mutating, and those that survive a treatment regime can evolve into a more resistant form.

“Learning how to evade the immune system and spread further is a trademark of cancers that evolve to a later stage,” Dr Heng said.

“Cancer can be very sneaky; knowing more of its secrets means we can get smarter in the way we deal with it.”

Image caption: Professor Gilles Guillemin, pictured far right, and his team are world leaders in molecular activity in the immune system. Dr Benjamin Heng is pictured fourth from the left.