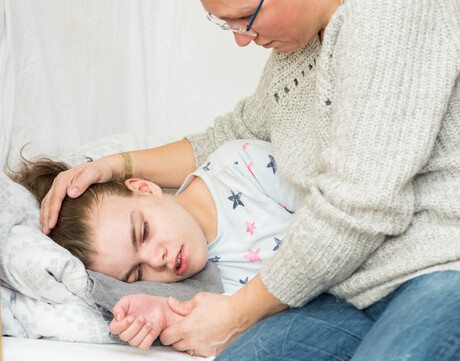 An international genetic study involving 7636 children from Australia and Denmark has identified seven variant genes that researchers say now substantially improve the understanding of the underlying causes of seizures in young children.

While most febrile seizures are benign and self-limiting with no recurrence, about 7% of children who have the seizures will later develop epilepsy.

The findings, involving the University of Melbourne, may assist in predicting which children are more likely to develop epilepsy later in life based on the risk genes they may carry.

“The link between febrile seizures and epilepsy has been known for years but its genetic underpinnings are only now emerging. GABRG2, a neurotransmitter receptor gene we discovered, is well-established as an important gene for epilepsy associated with febrile seizures, and this new clear link to febrile seizures prior to development of epilepsy is another important piece in this puzzle,” said Professor Sam Berkovic, co-author of the study.

Professor Berkovic, who is also Director of Epilepsy Research Centre at Austin Health, said three of the new genes produce presynaptic proteins that may turn out to be targets for new drug therapies, which would be particularly important for children who go on to develop epilepsy.

Professor Hildebrand, Head of the Translational Neurogenetics Laboratory, Epilepsy Research Centre, Melbourne Brain Centre, said, “Febrile seizures are the most common seizure type experienced by children, affecting two to five per cent of children before the age of five, meaning finding the causes of these seizures could be critical to understanding how epilepsy develops.”

Lead author Dr Bjarke Feenstra, from Statens Serum Institut, said the study had also revealed genes that could identify the development of fevers.

“The connections to fever response are intriguing. We hypothesise that genetic changes that affect the way the prostaglandin receptor (PTGER3) and interleukin (IL10) immune system genes normally function in mediating response to infections may lead to a more pronounced fever, which in turn could increase the susceptibility of children suffering febrile seizures.”