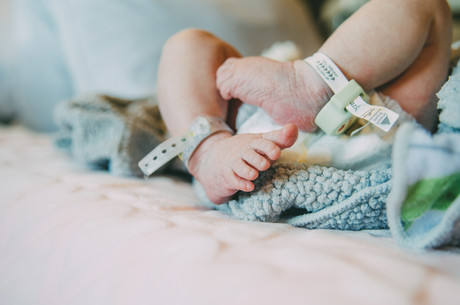 Watching a newborn baby take its first breath has always been a significant moment for parents and healthcare staff. Now, for the first time, doctors at the Royal Women’s Hospital have captured moving ultrasound images of the lungs of newborn babies as they take their first breaths.

The research, involving the Women’s and Monash University, signals a breakthrough in understanding how human lungs transition from the womb to the first breaths at birth.

Researchers say the new information could lead to the diagnosis of severe breathing problems in very preterm babies in the first minutes of life, instead of the current several hours, allowing for live-saving treatment.

In the DOLFIN study, researchers used ultrasound to captured images of 115 newborn lungs immediately after birth at the Women’s. This included images of 28 full-term babies before they took their first breaths after birth. The research has been published in Resuscitation and the BMJ Archives of Disease in Childhood.

“When looking at the lungs immediately after birth, they look more like liver and are filled with liquid, but as they fill with air for the first time, the liquid is pushed out and the lungs open as they aerate,” lead researcher Dr Douglas Blank from the Women’s and Monash University said. “Within 10 minutes, the lungs of these healthy babies appear to have nearly completed the adjustment needed after birth, although it does take, on average, up to four hours for all the liquid to be removed from the baby’s lungs.

“This research has important implications because the quality of the imaging and speed at which babies transition to normal lungs suggests we can make a diagnosis of lung problems in newborn babies within the first 20 minutes after birth using ultrasound. This is particularly important for premature infants as 50% have severe breathing problems and require intensive treatment. Currently, it takes several hours to assess the severity of breathing problems.”

Dr Blank is leading a new study, called DOLFIN Jr, to test whether it is possible to use imaging of the lungs in the first minutes of life to accurately predict which extremely pre-term babies (born before 29 weeks) need intensive breathing support and which babies will benefit from minimal breathing support.

Babies without severe breathing problems do not need ventilation and can receive CPAP breathing assistance, which decreases the risk of lung damage and death.

The window to decide which respiratory treatment is best suited for the baby is small.

Currently, extremely preterm babies receive minimal breathing support with CPAP to start. If their oxygen levels are too low, indicating they are struggling to breathe, they are given surfactant and put onto a breathing machine.

“Ultimately, we aim for babies who need the surfactant and help via a breathing machine to receive that support much earlier, while those whose lungs are functioning better will receive minimal breathing support,” Dr Blank said. “Lung ultrasound may be able to tell us which approach is suited for each baby. Targeting breathing support more accurately will reduce the risk of lung disease and death in both groups.”

Large transporter protein may be linked to schizophrenia