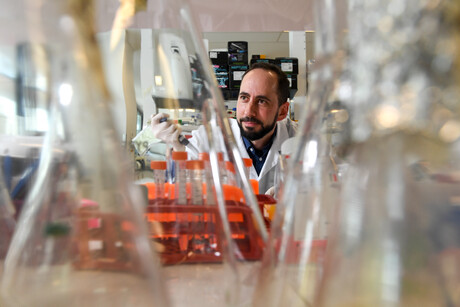 Gabriella, a teenage girl from Spain, was diagnosed with severe lupus — a chronic autoimmune disease in which the body’s immune system attacks its own tissues and organs — when she was seven years old.

More common in women than men, lupus can inflame the skin, blood cells, joints, kidneys, brain, heart and lungs. There is no cure for the disease, and little is understood of the genetic causes of lupus. Current treatments are predominantly immune suppressors which work by dialling down the immune system to alleviate symptoms.

Gabriella had severe lupus with early onset of symptoms — this is rare and indicates a single genetic cause, according to the international scientists who conducted a whole genome sequencing of her DNA.

The Hudson Institute team’s work was part of the multinational study published in the journal Nature. In their genetic analysis, carried out at the Centre for Personalised Immunology at the Australian National University, the researchers identified a novel genetic cause — mutation of the gene TLR7 — for this autoimmune disease. Via referrals from clinics in China and the US, they identified other cases of severe lupus where this gene was also mutated.

TLR7 is a critical sensor of our immune system, which gets set off by viral and bacterial RNA produced during an infection. Once engaged, TLR7 activates a suite of responses that facilitate clearance of the pathogen by immune cells — an inflammatory reaction which is normally transient.

Associate Professor Michael Gantier at the Hudson Institute of Medical Research, who is an expert in TLR7, helped the team decipher how the mutation promoted the aberrant activation of this key immune sensor. Once introduced in mice, the TLR7 mutation led to similar disease and symptoms, providing direct evidence that the TLR7 mutation was the cause. The mouse model and the mutation were both named ‘kika’ by Gabriella, the girl central to this discovery.

“We demonstrated that the TLR7 kika mutation increased the sensitivity to Guanosine, one of the key building blocks that make up our RNA. That means that with no infection — which is what this sensor normally detects — constant inflammation is aberrantly switched on leading to the auto-immune disease,” Gantier said.

The work may also help explain why lupus is about 10 times more frequent in females than in males. As TLR7 sits on the X chromosome, females have two copies of the gene while males have one.

Gabriella is still in touch with the research team and said: “I hope this finding will give hope to people with lupus and make them feel they are not alone in fighting this battle. Hopefully the research can continue and end up in a specific treatment that can benefit so many lupus warriors who suffer from this disease.”

This research now provides us with unique models to demonstrate the therapeutic efficacy of a novel class of TLR7 inhibitors which we have developed at Hudson Institute in partnership with Noxopharm, Gantier said.

“TLR7 is likely to hold the key to other auto-immune diseases, and is also critical to the immune response to mRNA vaccines. In addition to helping people like Gabriella, this study may help to improve mRNA vaccines and reduce the number and severity of their side effects.”