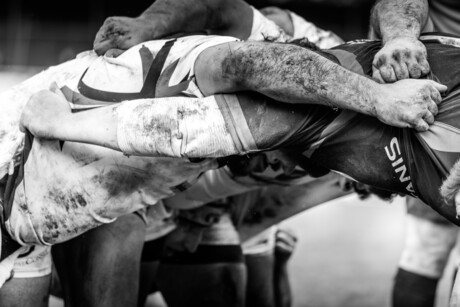 Researchers have identified distinct chemical ‘signatures’ for concussion in the spit of elite male rugby players, with findings published in the British Journal of Sports Medicine. The discovery could lead to the development of non-invasive, rapid diagnostic pitch-side testing for concussion.

In the absence of objective diagnostic tests for concussion, diagnosis currently relies on a clinician’s interpretation of the observed signs and symptoms, and the results of formal clinical assessments. A high percentage of concussions are missed, and concerns have emerged about the long-term brain health of athletes exposed to repeated concussions. The short-term consequences of a missed diagnosis range from a prolonged recovery period, often with protracted and pervasive symptoms, to a heightened risk of further injuries, including catastrophic brain swelling, although the researchers emphasised that this is rare.

Recent advances in gene sequencing have allowed scientists to look into the diagnostic potential of molecules called small non-coding RNAs, or sncRNAs for short. sncRNAs regulate the expression of different cellular proteins that are linked to various diseases, such as cancer and Alzheimer’s disease.

The researchers obtained saliva samples from more than 1000 male professional players in the top two tiers of England’s elite rugby union across two seasons (2017–19) of competition. Samples were collected from 1028 players before the season began, and during standardised ‘gold standard’ head injury assessments at three time points: during the game, immediately afterwards and 36–48 hours later in 156 of these players.

Saliva samples were also collected from a comparison group of 102 uninjured players and 66 who had sustained muscle or joint injuries, and therefore had not been assessed for head injury.

A combined panel of 14 sncRNAs differentiated concussed players from those with suspected traumatic brain injury, but whose head injury assessments had ruled out concussion, and from the comparison group, both immediately after the game and 36–48 hours later.

Although the study reveals that the sncRNA biomarkers cannot outperform the gold standard clinical assessment, it is thought that saliva can receive cellular signals directly from cranial nerves in the mouth and throat, and so can rapidly register traumatic brain injury, making a saliva test particularly suitable for a pitch-side diagnosis, the researchers suggested.

“Concussion can be hard to diagnose and is often missed, especially where a structured evaluation by an expert clinician is not possible — for example, at grass-root level,” they wrote. “Small non-coding RNAs can provide a diagnostic tool that might reduce the risk of missing this type of injury at all levels of participation.

“In community sport, [sncRNAs] may provide a non-invasive diagnostic test that is comparable in accuracy to the level of assessment available in a professional sport setting, while the test could be added to current head injury evaluation protocols at the elite level.

“The detection of signatures of concussion at early time points in saliva (a non-invasively sampled biofluid) presents both at the pitch side, and in primary care and emergency medicine departments, an opportunity to develop a new and objective diagnostic tool for this common clinical presentation,” they concluded.

Further studies are underway and a patented salivary concussion test is in the process of being commercialised as an over-the-counter test for elite male athletes.