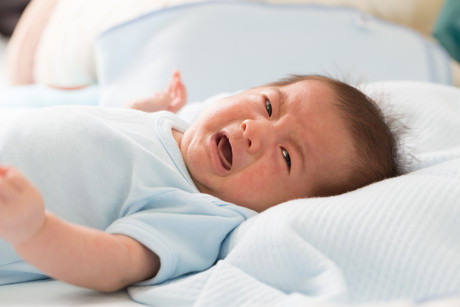 Babies who cry or fuss a lot and can’t be settled are often described as having ‘colic’. We don’t know what causes colic, but we do know it can be hard to handle.

The condition, which affects one in five families, is burdensome and is associated with maternal depression, child abuse such as Shaken Baby Syndrome and early breastfeeding cessation.

Up until now, there has been no effective treatment for colic. A new international study led by the Murdoch Children’s Research Institute (MCRI), in collaboration with 11 other institutions around the world, found the probiotic Lactobacillus reuteri has the potential to provide some reduction in crying in exclusively breastfed babies less than three months old.

Researchers found that compared to a placebo, the probiotic group was two times more likely to reduce crying by 50% by the 21st day of treatment, for the babies who were exclusively breastfed.

Lead author from MCRI and pediatrician Dr Valerie Sung said in the last decade, many studies have looked at the role of probiotics in treating colic. “One particular strain, Lactobacillus reuteri (L. reuteri) DSM 17938, has shown promise, but results have been conflicting.”

The Australian trial, also led by Dr Sung, was the largest and only trial including both breastfed and formula-fed babies which showed L. reuteri to be ineffective. However, when combined with the other three trials, it is clear that L. reuteri is effective for babies with colic who are exclusively breastfed.

Dr Sung said while the study was hopeful, the lack of studies on formula-fed babies meant it should not be considered an automatic cure.

“Ultimately, the effectiveness of this treatment will need to be assessed on a case-by-case basis. It is also important to remember that each probiotic strain works differently. L. reuteri is the only probiotic strain that may help crying babies who are breastfed.”