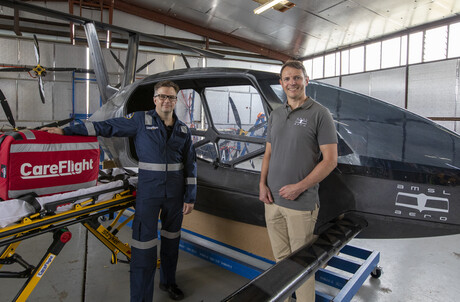 Vertiia is an electric vertical take-off and landing (eVTOL) aircraft that can cruise at a speed of 300 km/h and travel up to 250 km (electric) or 800 km (hydrogen). The aircraft is regarded as being considerably safer than travelling by helicopter, and is significantly quieter than combustion engine aircraft.

The partnership could see CareFlight deploy electric flying air ambulances within a few years, which will initially be flown by CareFlight pilots. CareFlight is also providing expert advice and input into the aircraft design to ensure it is fit for medical purposes.

Vertiia has potential applications across almost unlimited regions and industries — including flying taxis that could be summoned with a smartphone — however, Co-founder and CEO Andrew Moore said the company wanted to launch where the need was urgent and the impact would be profound and life-saving.

“Unlike aeromedical planes that require a runway, Vertiia will carry patients directly from any location straight to the hospital, significantly reducing the complexity and time transporting vulnerable patients. It will also be quieter and safer than helicopters, and will eventually cost as little as a car to maintain and run, transforming aeromedical transport into a far more affordable, accessible, safer and reliable option.

“Australia’s expansive geography and low population density makes this technology especially valuable, with other crucial applications including airlifting people during bushfires, or transporting rural patients for preventative health care and testing, instead of waiting until the point of critical illness, injury or risk of death.

“Being the most efficient eVTOL in the world, it also creates a tremendous opportunity to provide zero emissions air transport solutions.”

The partnership between AMSL Aero and CareFlight forms part of a $3 million Cooperative Research Centre project grant from the federal government, for a two-year collaborative project with the University of Sydney and autonomy and sensing specialists Mission Systems.

CareFlight CEO Mick Frewen said, “The advances in aeromedical service capability Vertiia promises will transform patient outcomes in vulnerable regional and remote communities. The safe and efficient new technology will enable CareFlight to provide the best clinical care for more Australians than has ever been possible, and importantly, get them that vital help much faster.

“The advance would supercharge CareFlight’s ability to deliver on our mission: to save lives and speed recovery and serve the community.”

University of Sydney Vice-Chancellor Dr Michael Spence said, “We are incredibly excited to be collaborating with AMSL Aero on the development of Vertiia, a technology which has the potential to rapidly decarbonise air travel and improve patient transport. Leading the project from the University of Sydney is Associate Professor Dries Verstraete and his team, who are deep experts in hydrogen fuel cell propulsion and multidisciplinary optimisation.”

Vertiia is currently being built at AMSL’s aerodrome at Bankstown Airport, with test flights to take place at its facility in Narromine Airport in regional New South Wales.