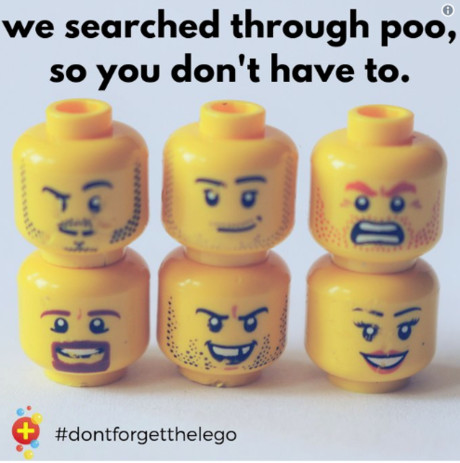 Sometimes health practitioners have to take matters into their own hands... or in this case, their own poo.

Six fearless Australian paediatricians swallowed yellow Lego heads in the name of science — and to help the countless parents who have asked: "My child swallowed a piece of Lego, how long will it take to exit?"

To get to the bottom of the question, University of Melbourne researcher Dr Andrew Tagg and five colleagues ingested yellow Lego heads then waited patiently for the answer to appear.

When asked how the doctors undertook the unenviable task of searching their poo for the Lego heads, Dr Tagg said: "A variety of techniques were tried — using a bag and squashing, tongue depressors and gloves, chopsticks — no turd was left unturned."

Based on their Stool Hardness and Transit scores and their Found and Retrieved Time (appropriately abbreviated to FART) scores, the average journey in this small sample group was 1.7 days — although one paediatrician searched hopefully for two weeks without finding the lost yellow head. So what happened to the missing head?

"Who knows? Perhaps one day many years from now, a gastroenterologist performing a colonoscopy will find it staring back at him," Dr Tagg quipped.

It's not clear if the missing head was a reflection of the doctor's searching skills, but the resultant study, published in the Journal of Paediatrics and Child Health, found "some evidence that females may be more accomplished at searching through their stools than males, but this could not be statistically validated".

The authors also noted that a toy object quickly passes through adult subjects with no complications. "This will reassure parents, and the authors advocate that no parent should be expected to search through their child's faeces to prove object retrieval," they wrote.

Nonetheless, children swallowing objects is no joking matter, particularly button batteries. "Although the majority of items children swallow pass through, some can be dangerous and parents should still be vigilant," Dr Tagg said.

The study was conducted by Don't Forget the Bubbles, a non-commercial source of paediatric education.