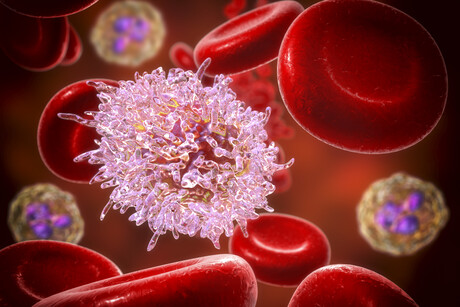 Combination PET/CT scans are better at investigating the causes of prolonged fever in blood cancer patients than conventional CT scans, according to a randomised multicentre trial led by Peter Mac.

The trial found patients who were given a combination scan were able to be given more targeted treatments, reducing the use of broad-spectrum antibiotics — and also time spent in hospital.

"A combination PET/CT scan allows us to rule in and rule out important diagnoses better than using conventional CT imaging," said infectious diseases physician Dr Abby Douglas, who was the investigator running the trial.

"That's because it is both more sensitive at picking up the site of the infection causing the fever and ruling out other important causes of fever."

Prolonged or recurrent fevers are a serious problem for blood cancer patients because the patients often have low levels of neutrophils — a type of white blood cell — that help them fight off infection.

Without enough of these defender cells, a fever left untreated can quickly lead to sepsis and even death.

"The issue in this patient group is that we often do not know what is causing the ongoing fever," said Professor Monica Slavin, who was the Principal Investigator on the trial.

"We worry about various types of infection, but there are other reasons for fever that don't need antibiotics."

Without a clear diagnosis, patients will often be given a protracted course of broad-spectrum antibiotics, which heightens their risk of developing antibiotic resistance and can also do long-term harm to their gut microbiome.

"It's both better for the patient and the healthcare system if we can pinpoint what is causing a fever so we can optimally treat it, and not use unnecessary broad-spectrum antibiotics," said Professor Karin Thursky, a senior investigator on the trial.

The researchers conducting the trial also found the patients who were given a combination PET/CT scan had a shorter stay in hospital.

"Getting out of hospital sooner is really important for patients who spend long and repeated stints here, and will likely improve their quality of life," Douglas said.

It also reduces their risk of healthcare-associated complications and the cost of their care.

While a combination FDG-PET/CT scan costs the healthcare system approximately $1000, that would likely be offset by the reduced time a patient is in hospital, and will be examined further in future research.

Results from the trial — conducted by Peter Mac clinical researchers from the Infectious Diseases, Haematology and Nuclear Imaging departments, in collaboration with colleagues from the University of Melbourne and the Royal Melbourne Hospital — have been published in The Lancet Haematology.