Children give endurance athletes a run for their money 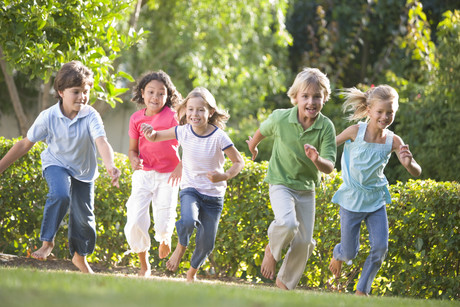 Have you ever wondered how children have the energy to run around all day? Researchers have found the answer: their muscles resist fatigue in the same way as elite endurance athletes.

Researchers from Edith Cowan University and the Université Clermont Auvergne in France tested three groups — boys aged 8 to 12, untrained adults and endurance athletes — to see how each recovered from strenuous physical activity.

They found that the young boys’ muscles were very resistant to fatigue during maximal cycling exercise at a level comparable to the endurance athletes. They also recovered quickly from the high-intensity exercise.

Professor Tony Blazevich from ECU’s School of Medical and Health Sciences said the children in the study actually recovered from high-intensity exercise faster than the endurance athletes.

“Most of us probably remember as children running around outside for hours and hours and then waking up the next day and doing it again, yet if we tried to do the same thing as adults we would be absolutely shattered,” he said.

“One way the children are able to have such good endurance is that they produce more of their energy aerobically compared to adults. Aerobic metabolism uses oxygen drawn from the blood to produce energy, and unlike anaerobic metabolism doesn’t produce lactate, which causes muscle fatigue.

“Additionally, the children were able to remove the lactate from their muscles faster than even the trained endurance athletes, allowing them to recover very quickly.”

Professor Blazevich said the findings were useful for parents who wish to develop their child’s athletic potential.

“Our study shows that muscle endurance is often very good in children, so it might be better to focus on other areas of fitness such as their sports technique, sprint speed or muscle strength. This may help to optimise physical training in children, so that they perform better and enjoy sports more,” he said.

The study leader, Associate Professor in Exercise Physiology Sébastien Ratel from Université Clermont Auvergne, said the research also sheds light on how the risk of developing diseases such as diabetes increases as we age.

“With the rise in diseases related to physical inactivity, it is helpful to understand the physiological changes with growth that might contribute to the risk of disease,” he said.

“Our research indicates that aerobic fitness, at least at the muscle level, decreases significantly as children move into adulthood, which is around the time increases in diseases such as diabetes occur.

“It will be interesting in future research to determine whether the muscular changes we have observed are directly related to disease risk. At least our results might provide motivation for practitioners to maintain muscle fitness as children grow up; it seems that being a child might be healthy for us.”

The study, ‘Metabolic and fatigue profiles are comparable between prepubertal children and well-trained adult endurance athletes’, was published recently in Frontiers in Physiology.