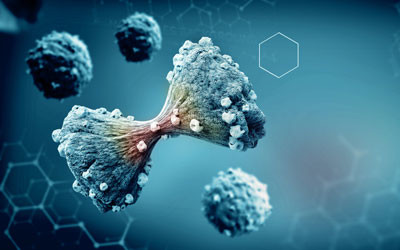 A urogenital and prostate cancer trial conducted by an Australian and New Zealand research group has made the cut in the American Society of Clinical Oncology’s (ASCO) Annual Report on Progress Against Cancer, which highlights the most important clinical research advances of the past year.

The Australian and New Zealand Urogenital and Prostate Cancer Trials Group (ANZUP) conducted the ENZAMET study, showing that hormone therapy with enzalutamide can improve survival in some men with advanced, hormone-sensitive prostate cancer. Men with this sort of cancer who receive enzalutamide with standard treatment had a 33% improvement in survival compared with men receiving standard treatment alone.

“The benefits of enzalutamide had already been established for prostate cancers that are no longer responding to hormonal therapy,” he said.

“ENZAMET showed that adding enzalutamide to standard treatment for men starting hormonal therapy for prostate cancer led to 33% reduction in the chance of dying of prostate cancer, and a 60% improvement in the time it takes to detect the cancer growing again.

“These results were much better than we thought they might be when we started the trial.

“Prostate cancer is complex and so are the benefits, side effects and risks of multiple treatments.”

Trial Co-Chair Professor Christopher Sweeney said, “Inclusion in ASCO’s Annual Report is testament to the fact that this is one of the most significant findings yet in clinical trials for men with metastatic hormone-sensitive prostate cancer — and a great example of effective international collaboration.”

In Australia in the 1980s, the cancer survival rate was less than 50%. Today, almost seven in 10 Australians will survive for at least five years after a cancer diagnosis and in some cancers the survival is as high as 90%. The death rate has also fallen by more than 24% compared with 1982.