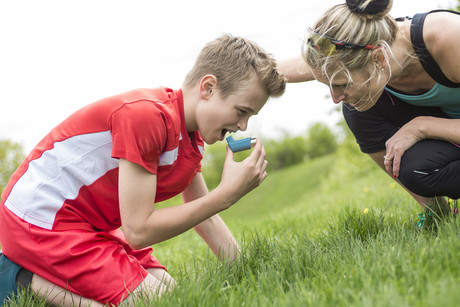 Boys with asthma are particularly susceptible to bone fractures, according to new Australian research.

The study, believed by the researchers to be the largest in the world of its type, has confirmed that asthma is associated with childhood fractures for boys, but not girls.

Led by the University of Melbourne, the study found that independent of age, boys with a recent wheeze, or who had 1–3 recent wheezy episodes, were 30% more likely to fracture a bone than boys who had not experienced a wheeze.

The same association was not found in girls, although older girls with asthma did have an increased risk of fracture.

University of Melbourne research fellow Dr Sharon Brennan-Olsen said the results highlight the need for bone health education for this potentially vulnerable group. “Given the number of children with asthma, we really need to promote bone health for them,” she said. “What we do in early childhood determines what could happen in later life, and whether those children develop musculoskeletal problems.”

Dr Brennan-Olsen said the study was significant due to its size, comprehensive asthma information, use of radiological evidence to identify fractures (rather than parental reporting) and inclusion of an entire regional population. “It is larger and stronger than previous studies,” she said.

Published in the Journal of Paediatrics and Child Health, the project investigated associations between asthma severity and radiologically determined fractures. It collected data from parents at 91 primary schools in the Barwon Statistical Division in south-west Victoria, covering 16,438 children aged from 3–14.

Researchers from the University of Melbourne, Deakin University, the Australian Institute for MSS, Murdoch Children’s Research Institute and Barwon Health used data from the 2005 Barwon Asthma Study and linked it with the Geelong Osteoporosis Study Fracture Grid fracture register.

The team, including Elizabeth Degabriele, and Professors Julie Pasco and Peter Vuillermin, identified 961 fractures sustained by 823 children in the study region; wrist injuries accounted for 52.3%. They then investigated associations with asthma symptoms and severity and how many times medical attention was needed for the asthma.

The authors speculate that girls may have fewer fractures due to faster maturing bodies and lifestyle differences, such as the types of sports activities, and/or differences in risk-taking at certain ages. “The sex-specific associations between asthma and fracture may relate to sexual maturation, as girls enter puberty at a younger age than boys,” they wrote. “Consistent with this, girls have the greatest bone mass accrual aged 11–15 years, whilst for boys this occurs between 14–15 years of age.”