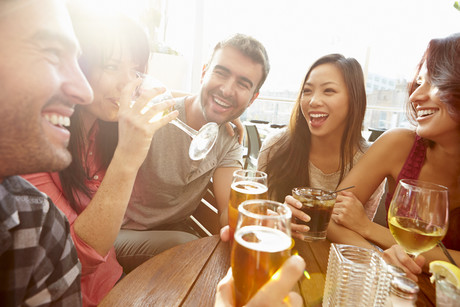 One in three female university students are skipping meals so they can binge drink the saved calories instead, a new South Australian study has found.

The behaviour, according to author Alycia Powell-Jones, is often referred to as ‘drunkorexic’ and supports a concerning trend among young women aged between 18 and 24 years.

In a two-pronged study, the University of South Australia researchers also found women with insufficient self-control, emotional deprivation and social isolation were most likely to exhibit this drunkorexic behaviour.

“The results were surprising; there was a really large percentage of people who were engaging in and endorsing this behaviour and it’s quite concerning about the health impacts,” Powell-Jones, a registered clinical psychologist, said.

Students were dropping food or eating differently in favour of drinking alcohol by either restricting their food intake, exercising or purging, for reasons like avoiding putting on weight.

Powell-Jones said the study had two focuses — investigating the prevalence of drunkorexia-type behaviour in young Australian women and exploring the reasons why this was happening.

Results from 479 undergraduate female Australian university students aged between 18 and 24 were collated across the universities in South Australia in part one of the study and 334 in part two.

All students involved had consumed alcohol in the previous 90 days and the study groups did not include students with diagnosed eating disorders.

Powell-Jones said young adulthood was a high-risk time for young people to be engaging in disordered eating patterns and problematic alcohol consumption.

Binge drinking was defined in the study as having four or more alcoholic beverages in one sitting, at least once a week.

The results showed more than 28% of participants across both parts of this study reported engaging in drunkorexia behaviour to specifically offset ingested calories.

But they were not involved in this behaviour for any other reason or with any other type of drink or food.

Another surprising result was that this study recorded almost double the number of participants engaging in drunkorexia behaviours compared to a previous study conducted in Australia in 2017.

The report also said earlier research on binge drinking in young adults indicates that a number of strategies are commonly used to enhance the effects of alcohol, such as mixing drinks, consuming drinks more quickly and drinking prior to going out.

“This study provides support for prior findings that dangerous, and potentially harmful drunkorexia behaviours are being engaged in by a substantial proportion of young female Australians,” the report said.

“Future research should investigate whether such behavioural characteristics of binge drinking are also common in drunkorexia, in order to better understand this phenomenon.”

Participants had on average engaged in more than two binge drinking episodes in the 90 days prior to completing the questionnaire, and on average, were consuming just over three beverages at each social event they attended during this period of time.

“The insight provided into the early maladaptive schemas (EMS) associated with drunkorexia behaviours provides preliminary information into potential risk factors and beliefs that may drive and perpetuate this pattern,” the study found.

“It may be that within the context of cultural norms for thinness, and a strong binge drinking culture, those with higher levels of EMS may be more at risk of developing a pathological and serious drunkorexia problem.

“Further research is urgently needed to understand drunkorexia as a potentially serious health problem for young people, and to identify the important underlying and maintaining factors associated with this growing problem.”