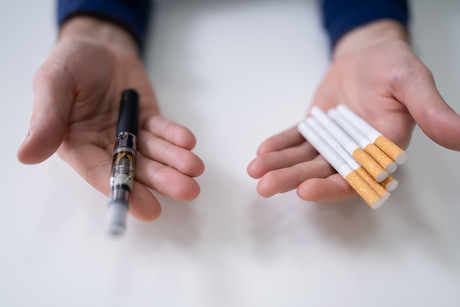 E-cigarettes containing nicotine are illegal in Australia. Some health experts believe they shouldn’t be, arguing that e‑cigarettes are an effective smoking-cessation tool. Others say that vaping is harmful and warn of an uptake in vaping by young Australians. So what is Australia’s best path to achieve the best public health outcome: legalise vaping or not?

Nicotine-containing e-cigarettes are legal in the UK, the EU the US and, more recently, New Zealand. Many regulators and health experts in Australia acknowledge that e-cigarettes could play a legitimate and valuable role in reducing the negative consequences of smoking, providing smokers with an effective tool to quit.

Other tools such as patches and gum — known as nicotine-replacement therapies (NRTs) — have been shown to be less effective quitting tools compared with e-cigarettes in a study published in The New England Journal of Medicine. Many smokers miss the sensory element of smoking cigarettes. Some miss the social element of smoking with others.

In March 2018, The Standing Committee on Health, Aged Care and Sport published a report following a year-long inquiry into e-cigarettes, recommending that the Australian ban on e-cigarettes remain in place.

Although nicotine-containing e-cigarettes cannot be legally purchased in Australia, nicotine can be imported via the Therapeutic Goods Administration’s (TGA) Personal Importation Scheme with a prescription from a GP. Products that promote therapeutic outcomes must obtain TGA approval before they can be sold.

Despite being illegal, nicotine e-cigarettes are available in Australia via online overseas retailers and the black market. While these are unregulated, potentially compromising consumer safety, many vaping communities have identified sources for vaping products that have been cleared by overseas governments.

One of the main arguments of health professionals in support of vaping to quit is that if vaping products were legal in Australia, they could be appropriately regulated to ensure consumer safety.

The risk is in the delivery

While nicotine is addictive and a key barrier to quitting smoking, it is widely accepted that the main health threat to smokers comes from the delivery system. The combustive process of smoking cigarettes and the resulting toxins and carcinogens that are inhaled — including benzene, carbon monoxide, ammonia, arsenic and lead — are serious threats to health, leading to life-threatening conditions such as cardiovascular disease, stroke and lung cancer.

With vaping, there’s no combustion, no smoke, no tar. There are chemicals present in e-cigarettes — they are by no means harmless devices — but the main argument is that if you’re addicted to nicotine and can’t quit smoking, vaping is a better option.

Given that e-cigarettes have emerged relatively recently, many argue that we do not have the long-term data to assess the ongoing health impact of vaping.

Australian Tobacco Harm Reduction Association (ATHRA) Chair Dr Joe Kosterich spoke to Hospital + Healthcare, explaining that while we do not have the same volume of data as for smoking, vaping has been around for long enough to see that it is less harmful than smoking.

“What we do know from 15–17 years of experience is that there are far, far fewer chemicals involved with vaping compared with smoking,” he said.

“Vapers are not exposing themselves to the carcinogenic compounds that smokers are.”

Dr Kosterich highlighted that when it comes to vaping, the question of safety depends on what question is being asked.

“If the question is ‘should non-smokers start vaping?’ the answer would be no. But if we’re talking about smokers who are struggling to quit, then vaping is the better option.

“When we look to countries where vaping has been established for some time, we can look to the UK, where reviews conducted by Public Health England (PHE) have found vaping to be at least 95% less harmful than smoking cigarettes.”

PHE’s research has driven UK public health policy, with vaping successfully harnessed as a smoking-cessation tool. The UK Office for National Statistics reported a smoking rate of 14.7% in 2018, down from 20.2% in 2011. Other countries that allow vaping have seen similar declines in smoking rates.

Smokers who have switched to vaping typically experience improvements to their health within a short period of time. A 2019 study published in the Journal of the American College of Cardiology found that smokers demonstrated a significant improvement in vascular function within one month of switching to e-cigarettes.

What about the US?

In its podcast The Truth About the Vaping Crisis, Freakonomics Radio explored the specific conditions that led to the vaping-related health crisis in the United States. While the UK adopted a harm reduction strategy — aimed at maximising smoking cessation among adults and minimising uptake by young people — the US went down a different path…

The U.S. Food and Drug Administration (FDA) initially classified e-cigarettes as drug-delivery devices, not tobacco products, meaning they were subjected to tough restrictions that effectively banned the sale of e-cigarettes.

This ruling was contested by e-cigarette companies, leading to the reclassification of e-cigarettes as tobacco products. This lifted the ban on their sale, but prevented them from being promoted as smoking-cessation tools. As companies were unable to market to smokers, marketing that happened to appeal to younger Americans — fun colours and flavourings, for example — led to a boost in vaping uptake by 18- to 24-year-olds, many of whom had never smoked. A lack of regulation meant that hundreds of America’s youth became addicted to nicotine.

The UK’s regulatory measures sought to protect youth by limiting the amount of nicotine in vaping products to 20 mg/mL. The US did not implement these regulations, with some vaping liquids containing as much as 54 mg of nicotine per mL, contributing to much higher youth vaping rates.

On 2 January 2020, the FDA issued a policy prioritising enforcement against certain unauthorised flavoured e-cigarette products that appeal to children, including fruit and mint flavours. Under this policy, companies that do not cease manufacture, distribution and sale of unauthorised flavoured cartridge-based e-cigarettes (other than tobacco or menthol) within 30 days risk FDA enforcement actions.

ATHRA reported that the outbreak of serious vaping-related lung injuries in the US and Canada is almost certainly due to black-market THC (cannabis) oils sold by unauthorised dealers, not nicotine e-liquid.

There are concerns that the availability of e-cigarettes in Australia may serve as a ‘gateway’ into smoking, particularly for young people. Some argue that e-cigarettes could renormalise smoking and lead to new nicotine addictions and a pathway to tobacco cigarettes.

Restrictions on the sale and marketing of e-cigarettes to younger people can help to alleviate this risk.

Examples from countries such as the UK indicate that smoking rates among younger cohorts continue to fall in places where e-cigarettes are available. Cancer Research UK stated that despite the availability of e-cigarettes in the UK there has been no increase in youth smoking of tobacco.

When looking at Australia’s situation, Dr Kosterich stated that regulation is important to ensure people get what they think they’re getting.

“Risk cannot be obliterated. Teens are a cohort in our society that will inherently take risks,” he said.

“Is it a good thing that teens experiment with vaping? No, but it is less noxious and harmful than smoking. People are far better breathing air, but the reality is that experimentation will happen so we have to focus on finding strategies to minimise harm and this is what we want for public health policy in Australia.”

Following Rare Diseases Day, we shine a spotlight on childhood dementia, which affects 2300...

Recent work by the Australian Commission on Safety and Quality in Health Care has delivered a...

Australia's vaccine program kicked off at the start of this week, with the country's most...

Steinecker to be an autonomous company within Krones

Public sector modernisation: how governments should think about cloud in 2021