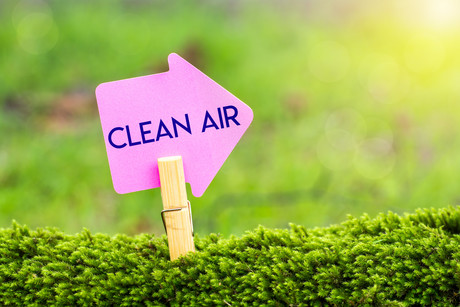 Hydroxyls or hydroxyl clusters are nature’s method of cleaning the air of odours, bacteria and viruses. Found mostly at mountain-top heights — particularly on sunny days — hydroxyls are extremely effective at killing single-celled organisms such as bacteria, viruses, mould and fungus spores.

Ozone is also nature’s odour and pathogen killer but is poisonous to all forms of life at the concentrations required to be effective. Hydroxyls, however, are claimed to be safe at any concentration.

Today’s technology allows hydroxyls to be easily reproduced via compact devices that can be employed in hospitals (particularly hospital kitchens), aged-care facilities and a wide range of other applications to improve air quality and rid the air of airborne pathogens such as respiratory diseases and other bacteria that may contaminate and spread in food products.

Hydroxyls are also effective against a range of odours, eliminating ammonia-based odours in roughly half the time of natural dispersion. In addition, hydroxyls are effective against ethylene gas, which is emitted by fruit and vegetables to promote ripening. Bananas can be slowed from browning for up to four extra days by being stored in an area controlled by a hydroxyl generator. Waste and decomposition gases can also be reduced by the presence of hydroxyls. Hydroxyls have proven results in deodorising smoking smells.

Tests have demonstrated effective elimination by hydroxyls of the following:

Hydroxyls have been known to scientists and researched for some 100 years since Louis Pasteur first discovered them when researching why people living at high altitudes in sunny conditions were generally healthier than people living at sea level. Since then, organisations such as the British Army have researched hydroxyls as a method of combating germ warfare in the late 1960s — all papers and studies have confirmed the benefits of using hydroxyls, but until this century had not been able to reproduce them by a compact means.

What exactly is hydroxyl and how does it work?

In the meantime, the cell wall of the organism has been ruptured and, like a popped balloon, it dies. This is a very simple mechanical action that bacteria and viruses cannot become immune to. Hydroxyl does not discriminate between bacteria and viruses, attacking all equally.

Baxx is an environmental pathogen and air-borne pollutant removal system that reproduces the natural occurrence of airborne hydroxyl clusters as found in high altitudes and sunny conditions. Cold plasma technology passes air through a small cold plasma field to produce hydroxyls, which are distributed throughout a space via a strong fan. Water molecules in the air are drawn through the Baxx cold plasma field and converted to hydroxyl clusters — put simply, they lose a hydrogen atom. The hydroxyls are then dispersed and come into contact with bacteria cells where they attach to the cell wall and remove a hydrogen atom, thereby killing the bacterium cell instantly. The cluster regains its missing hydrogen atom and returns to being a water molecule.

The Baxx device is a compact stainless steel 240 V appliance that does not require any maintenance or consumables other than electricity, and can be mounted high on a wall or ceiling to gain maximum coverage. The system uses water molecules in the air and do not require topping up, chemicals or any other medium to perform its hydroxyl-generating function.

From delivering over 500K vaccinations to disability and aged-care residents to achieving over...