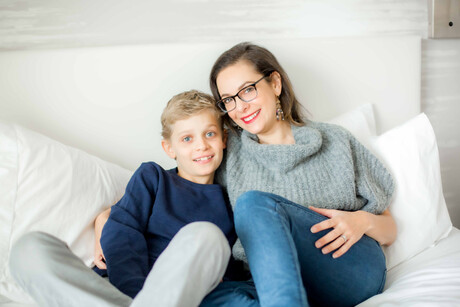 Dana Kay’s son has ADHD. Frustrated with the effects of traditional medicine, she sought an alternative. The outcome changed her life — and that of hundreds of other families. Here, she shares her story with Laini Bennett*.

When Dana Kay’s son Oliver was a toddler, he seemed to have abnormal amounts of energy. “He couldn’t sit still and eat; he’d be bouncing off the walls,” she said. His teachers assured her he was a typical, energetic young boy.

But the tantrums that arrived during his ‘terrible twos’ seemed much worse than those of his kindy friends, and never waned. As he grew older, Kay would wake each day with dread, unsure what mood her son would be in and what would trigger a meltdown.

When Oliver was four, he was finally diagnosed as having ADHD. The medication prescribed by the specialist initially worked. Kay was thrilled to see Oliver playing with Lego quietly with his younger brother, Asher. But the calm periods didn’t last long, resulting in the doctor increasing Oliver’s meds three more times over the coming weeks.

With these increases came side effects, including anxiety, sleeplessness and weight loss, for which the doctor prescribed more medication. Oliver was five years old and on three different meds, yet he was still exploding by 3 pm most days. The meds were suppressing, not stopping, the tantrums.

“I knew there had to be a better way,” Kay said. “That was the day my journey started.”

Finding her own solution

Kay began to educate herself by reading everything she could, later undertaking a nutrition certificate, a holistic health degree and other qualifications.

Soon, she learned that diet could significantly impact the behaviour of ADHD children, and poor gut health could cause food sensitivities. While Oliver’s doctor was dismissive of her findings, Kay chose to trust her instincts and removed gluten, dairy and soy from Oliver’s diet. Within two weeks, the change was dramatic. He was once again sitting calmly, and the tantrums had faded.

“From one day to the next, he was like a different child,” Kay said.

Over three months, he was weaned off his medications, and the side effects vanished. Today, Oliver is 12 and an A grade student. Kay says you’d never even know he has ADHD.

Kay wants to help other families with ADHD children, so they too could benefit from her experiences.

Her business, the ADHD Thrive Institute, has helped nearly 1000 families in less than four years. Families undertake a 12- to 24-week online program and can choose to attend group coaching sessions up to five times a week.

Kay takes a holistic approach, from identifying food sensitivities to helping families through dietary changes with shopping lists and recipes; she even educates grandparents on showing their love through food without impacting their ADHD grandchildren. She also has a free Facebook group for ADHD families with 18,000 members for which she runs twice-weekly training and shares many resources.

“I want families to know that they do not need to suffer as I did,” Kay said. “Parents think they are all alone, but you’re not.”

Her impact on others

“No major meltdowns or extended crying periods in almost a week. Grateful!!!”

“We went from about to get kicked out from a school to a report card saying he’s a joy.”

“This program was the best thing I have ever done for my daughter.”

Kay is overjoyed by the impact she is having and wants to make her program even more accessible to families. For this reason, she will soon release a book entitled ‘ADHD and Thriving’, which will document her journey and how other families can reduce their child’s ADHD symptoms, just as she teaches in her online program. It will also provide free resources.

“It’s my big audacious goal that one day, doctors will give parents with ADHD children my book, or something like it, rather than referring them directly to medicine,” she said.

How this hospital halved its code blacks

It used to be a familiar scene for Emergency Department Director Prof. Paul Preisz. A psychiatric...