Some children on IV can be treated at home 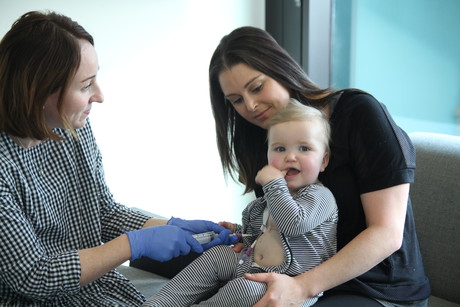 Some sick children may be eligible to continue their treatment at home, helping them to leave hospital sooner rather than later — an option that is likely to improve the child’s recovery time and make life easier on their family.

Researchers from Murdoch Childrens Research Institute (MCRI) have found that some children with severe infections requiring intravenous (IV) antibiotics can safely have these at home, and that home treatment was as good as in hospital in terms of safety, cost and patient satisfaction.

The review, published in The Lancet Infectious Diseases journal, looked at all studies where children were given IV antibiotics at home and compared them to those given in hospital. The results showed that patients and families preferred to be at home and that it was cost-effective for the healthcare system, freeing up beds for other patients.

The authors of the systematic review were Associate Professor Penelope Bryant and Dr Naomi Katz from MCRI. First author Associate Professor Bryant, who is the paediatric representative of the National Hospital-in-the-Home Society, said the study was an important step in trying to get children home sooner.

“This study gives the evidence to support doctors to treat their patients with IV antibiotics at home while keeping them under daily medical review. If we can get children safely home even one day earlier, then that’s a good thing,” she said. “Children do better psychologically at home, they get better faster, they are less at risk of hospital-acquired infections, and dynamics are improved for the whole family.”

Luca Pickwell, 15 months old, had been in hospital for cardiac surgery for 29 days and had just commenced treatment of antibiotics. With 24 days of treatment remaining, Luca was able to have his daily IV antibiotics administered at home. His mother, Rebecca Danne, said she was delighted when asked about her son receiving his final treatment at home. “It was great to get back home and get back into a routine as a family again,” she said.

Rebecca said the benefits were twofold, both freeing resources for the hospital and enabling her to have Luca back at home. She said she found the experience positive. “I could not fault the process — the staff would always call before coming over, they were really responsive, clean and positive. I would definitely recommend it to other families.”

“It is likely that there are many patients currently being treated in hospital who could be treated at home, both in Australia and worldwide,” said Associate Professor Bryant. “And it’s not just IV antibiotics — other traditional hospital interventions could also be given outside the hospital environment. To see just how far-reaching into improving health care this type of program could be, further research is needed. We are currently looking at trying to prevent some patients from having to be admitted to hospital at all.”