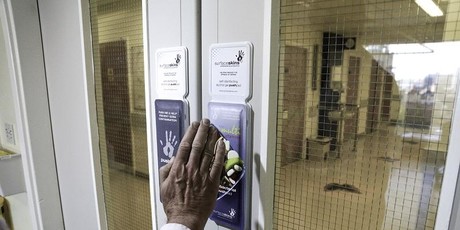 A new textile that can reduce bacteria levels by more than 90% is the latest weapon in the battle against deadly hospital-acquired infections.

The specially engineered textile has been incorporated into a device used on hospital doors instead of the traditional aluminium door plate, the part of the door that people push to open it, bolstering hand hygiene.

Hospital doors are recognised as a key weak link in hygiene because of the number of times people touch them. It takes just one person with dirty hands to pass through a door to put everyone else who follows at risk of cross-contamination.

How the textile works

The self-disinfecting device — known as Surfaceskins — has been developed by a spin out company from the University of Leeds and is the culmination of seven years’ research and development.

Surfaceskins antibacterial door pads work by dispensing a small quantity of alcohol gel onto the pad when it is pushed, to disinfect the surface ready for the next person to use the door.

This low-cost device, which incorporates three separate non-woven textiles, is designed to be replaced after seven days or one thousand pushes, whichever comes sooner.

Surfaceskins antibacterial door pads are not meant to replace the strict handwashing rules in hospitals, but instead provide an extra line of defence by helping clean hands to stay clean — indeed experts expect that Surfaceskins will increase people’s awareness of the importance of washing hands and hand hygiene.

The company has also developed a door handle using the Surfaceskins technology, for doors which open towards you.

Surfaceskins are being targeted at other industrial sectors where there is a need for meticulous hand hygiene, such as in catering and hospitality. They could also be used on cruise ships where the spread of bacteria can lead to outbreaks of sickness.

A study into the effectiveness of the new technology has just been published in the Journal of Hospital Infection.