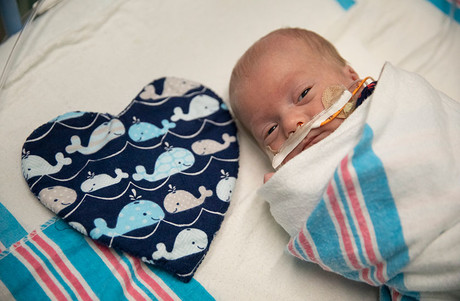 For parents of a premature baby, it can be both challenging and isolating not being able to cuddle their child while in a hospital’s neonatal intensive care unit, or NICU.

Which is why Rush University College of Nursing in the US, together with its local quilting club, is sewing handmade fabric hearts to help newborns and their parents bond by sharing their scents.

“The sense of smell is one of the earliest senses to develop,” said Christie Lawrence, clinical nurse specialist and assistant professor in the Department of Women, Children and Family Nursing. “Foetuses can actually recognise their mothers’ amniotic fluid while still in the womb.” Amniotic fluid, which babies swallow and breathe during their time in utero, contains the smells of food the mother eats as well as of the mum herself.

Because of this fact, in late 2017 Lawrence and Assistant Professor Terry Gallagher discussed the benefits of using ‘smell cloths’ in the NICU.

“After birth, the sense of smell continues to develop, and it is one of the senses that helps the infant recognise the mother,” said Lawrence. “So having the mum’s familiar scent can really help ease an infant’s stress and discomfort.”

For new parents, being able to smell their baby also brings a sense of calm. Lawrence says parents can feel overwhelmed and disconnected when they see their infants in incubators in a NICU, but familiar scents can help families forge a closer connection.

Threading together a community

To create the 20 cm cloth hearts, the nurses joined forces with a quilting club of residents from Oakley Square Apartments, a mixed-income residential complex on Chicago’s West Side, many of whom receive care at a clinic run by the College of Nursing’s Office of Faculty Practice. Each year the clinic provides primary care and education to approximately 500 Medicaid or uninsured patients of all ages.

The clinic provides much more than care — it’s also a direct link to active community residents like Janeen Allen, a member of the Oakley Square quilting club. Allen and her fellow quilters have been sewing the NICU fabric hearts since December 2017.

Each year, the Level III NICU — which has the capacity to take care of infants who are critically ill — admits 800 babies born prematurely, who often spend weeks or months in the unit getting stronger before they can go home.

The College of Nursing is committed to continuing funding for the program annually and plans to purchase enough materials to produce as many as 1600 hearts per year.

“Sewing the hearts gives us an opportunity to give back,” Allen said. “It’s fun to know that with the little hearts we’re making right now, somebody may have them forever.”

Hearts and scents travel from parents to baby and back

When families in the NICU receive cloth hearts, parents pin them inside their clothes. When the parents return to the NICU, the hearts are unpinned and placed inside the incubator so the baby can be comforted by their scent.

Though Allen prefers to sew hearts by hand, other quilters use the sewing machine provided by Rush two years ago. The machine was a thank-you gift to the quilters for their help with another project: making blankets for young mothers at the Simpson Academy for Young Women, a school for pregnant women and young mothers on Chicago’s West Side.