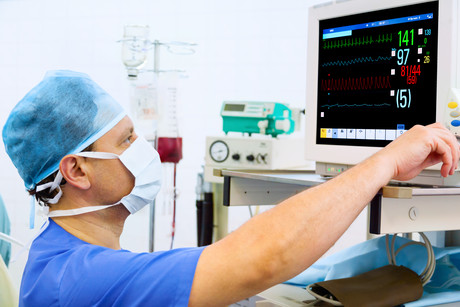 A team of anaesthetists at the Princess Alexandra Hospital, Qld, has developed a procedure which enables surgeons to operate on patients who would previously have been deemed unsuitable.

The team, headed up by Dr Anton Booth, recently appointed as a Senior Lecturer with UQ’s Faculty of Medicine, has helped pioneer this new anaesthesia technique known as The technique, known as STRIVE Hi, to make surgery safer for patients with obstructed airways.

“Traditionally with anaesthesia we expect patients to stop breathing, as we are putting them into a state resembling a medically induced coma,” Dr Booth said.

“Our job as anaesthetists is to take over breathing for the patient to keep them oxygenated, often through intubation,” he said.

He continued, “In patients undergoing surgery for narrowed airways we can’t insert a tube into the trachea where the surgeons are trying to operate. Instead we implemented a way to keep the patient breathing spontaneously during anaesthesia.”

“Through this combination we have been able to manage anaesthesia for patients with very challenging airway narrowing,” he said.

“We have been able to achieve quite spectacular improvements in oxygen levels while patients are in deep anaesthesia.

“This is a modern alternative to traditional techniques and has great potential to be used in many other scenarios.

“The technique has been credited with helping to save at least one life already.

“An adult patient with an infected epiglottis was in danger of having his airway blocked by rapid swelling, and this technique enabled us to safely control his airway without surgery.

“It is also making a difference to quality of life for those people who may previously have been unsuitable for surgery. Surgeons have been able to operate on patients with airway obstructions who would have faced permanent tracheostomy in the past.

“Difficult airway management is a vital part of anaesthesia and we feel that we have made a significant contribution to improve its safety,” Dr Booth said.

The new technique has been detailed in the British Journal of Anaesthesia.