Return Your Opioids campaign kicks off 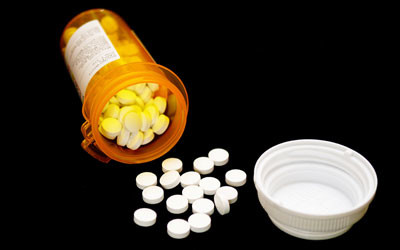 As the Therapeutic Goods Administration (TGA) launches a new awareness campaign aimed at curbing the growing incidence of harm caused by opioid-containing products, an international collaboration has reported the worryingly high ratio of opioid prescriptions for osteoarthritis patients in Sweden.

In Australia, nearly 150 people are hospitalised every day due to opioid harm. This is because opioids are addictive and can have serious interactions with other medicines; can also be accidentally consumed by children or pets; and are known to be targets for theft and misuse. Unsafe disposal of unwanted medicines can also lead to environmental harm.

With this in mind, the TGA is encouraging all Australians to return their unused opioids to their local pharmacy — which provides a free and convenient way to dispose of unwanted medicines responsibly — rather than keeping them ‘just in case’. To help get this important message out, each community pharmacy in Australia has been sent 500 repeat script covers encouraging safe disposal of unwanted medicines.

The initiative has been welcomed by the Society of Hospital Pharmacists of Australia (SHPA), with Chief Executive Kristin Michaels saying the campaign centres on important messages that will resonate with hospital pharmacists across the country.

“The TGA’s #ReturnYourOpioids campaign is powerful as it reminds Australians of the 100 daily hospitalisations and two-thirds of drug-related deaths that are linked to opioid misuse, data explored in detail in SHPA’s November 2018 report and subsequent 33 recommendations for collaborative response,” she said.

“The core messages are also crucial: strong medicines should not be kept around just in case and the presence of these puts curious children and pets as well as adults, at risk.”

Michaels said the warning regarding just in case possession of opioid products must be repeated, to patient and healthcare audiences alike.

“In our ‘Reducing Opioid-Related Harm’ report more than 70% of respondents reported that opioids were still provided to patients to take home just in case, even when they had not been required in the prior 48 hours.

“In the subsequent recommendations, we urge the need to support the education of doctors and non-medical prescribers regarding appropriate opioid prescribing for patients pre-operatively, during admission and at discharge.

“We also advocate for clinicians to be supported to prescribe the smallest quantity of analgesics, including dispensing partial packs of analgesics where this is appropriate for the needs of the patient.”

The campaign coincides with an investigation into how common opioid prescriptions are for osteoarthritis patients in Sweden, where personal data is conveniently collected in a register that is connected to the individual’s own personal identification number — data that is not typically available in most countries. The results of the study have been published in the journal Osteoarthritis and Cartilage.

The research team from Sweden, Denmark and the UK based their work on the population registry in southern Sweden of people who were at least 35 years old (a total of 751,579 people) and who had received a diagnosis of knee or hip osteoarthritis at some point during 1998–2015 (a total of 82,379 people). Using the Swedish Prescribed Drug Register, the researchers were able to see how many of these people were prescribed opioid preparations between 1 November 2014 and 31 October 2015. This was reported to be every fourth osteoarthritis patient (24%).

The study also estimated that at least 12% of all new opioid prescriptions are given to patients with osteoarthritis. The most frequently prescribed drugs were codeine, tramadol, oxycodone and morphine preparations.

“If the patient has developed severe osteoarthritis, and other treatments do not offer sufficient relief of symptoms, it is possible to offer prosthetic surgery. However, it is substantial and expensive surgical treatment, and should only be offered to patients that really need the operation,” Englund said.

“Unfortunately, the healthcare system is lacking in pharmaceutical treatment options that can relieve pain and modify the development of the disease itself, ie, have an impact on the actual biological process. We need more research on this.”