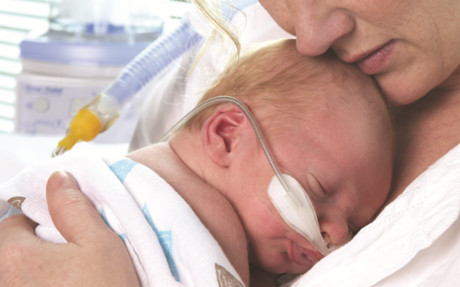 After more than 10 years of research, Australian medical researchers are set to change the way we treat infants with respiratory illness, with Queensland emergency departments already adopting the new therapy.

Respiratory illness, specifically bronchiolitis, is the leading cause of paediatric hospital admissions in Australia. Annually, nearly 9000 children under the age of one year are admitted to hospital with the illness, and 10–20% require breathing support via a mask or intubation in a paediatric intensive care unit (PICU).

However, the number of PICU admissions could be almost halved thanks to pioneering research by a Brisbane-based team, which is championing the use of high-flow nasal cannulation (HFNC) to treat bronchiolitic infants in the emergency department.

HFNC provides a supply of warm, humidified oxygen via a thin nasal tube and, because it’s easy to use and comfortable for the patient, infants don’t require sedation.

“The first time I saw a high-flow device I didn’t think it would make any difference and there was certainly a lack of evidence to support its use in paediatrics,” said A/Prof Schibler.

However, the PICU nurses he was working with were convinced that infants were responding better when treated with high-flow (and they were right).

A/Prof Schibler and the team first had to show that HFNC was safe to use in infants in PICU. They did, and found that it also led to a 33% drop in the use of invasive ventilation in the PICU.

Next, the team wanted to see if it could extend the use of HFNC to reduce the number of bronchiolitic infants ending up in PICU. With a grant from the Emergency Medicine Foundation (EMF) — funded by Queensland Health — A/Prof Schibler and Emergency Medicine Staff Specialist Dr Christa Bell ran a pilot study using high-flow in emergency departments. Their research led to a NHMRC-funded multicentre, randomised clinical trial, which recruited 1400 infants from 17 hospitals across Australia and New Zealand.

While the trial data won’t be published until later this year, Queensland has already adopted new guidelines for the use of HFNC in the emergency department and paediatric wards.

From preliminary data, A/Prof Schibler suspects that when high-flow is used early in bronchiolitis infants, it has the potential to reduce PICU admissions by 40% and healthcare costs associated with treating infants with bronchiolitis by up to half. It could also allow infants in rural and regional areas to be treated closer to home.

“High-flow nasal cannulation is a game changer, there’s no question about it.”

Dr Schibler has received grants from the Children’s Hospital Foundation, EMF/Queensland Health, the NHMRC and the Thrasher Foundation for his research into HFNC as well as in-kind support from Fisher & Paykel.