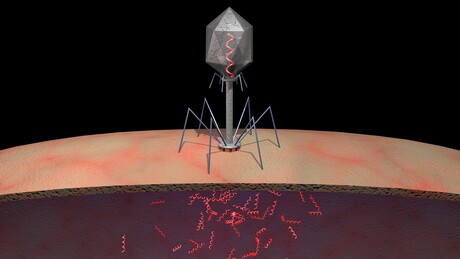 A team of Monash researchers has discovered how to revert antibiotic resistance in one of the most dangerous superbugs: Acinetobacter baumannii — responsible for up to 20% of infections in intensive care units.

Published in Nature Microbiology, the research paper describes the use of bacteriophages — also known as ‘phages’ — to kill A. baumannii, pinpointing how the superbug becomes resistant to attack from phages, and in doing so, loses its resistance to antibiotics.

“They only kill bacteria.”

Dr Jeremy Barr — senior study author, Group Leader at the School of Biological Sciences and part of the Centre to Impact AMR — added, “We have a large panel of phages that are able to kill antibiotic-resistant A. baumannii. But this superbug is smart, and in the same way it becomes resistant to antibiotics, it also quickly becomes resistant to our phages.”

Dr Altamirano explained that A. baumannii produces a capsule — a viscous and sticky outer layer that protects it and stops the entry of antibiotics.

“Our phages use that same capsule as their port of entry to infect the bacterial cell,” Dr Altamirano said.

“In an effort to escape from the phages, A. baumannii stops producing its capsule — and that’s when we can hit it with the antibiotics it used to resist.”

The study showed resensitisation to at least seven different antibiotics.

Even though more research is needed before this therapeutic strategy can be applied in the clinic, the prospects are encouraging.

What we can do to protect ourselves from new COVID-19 strains?

With a tendency to mutate being a hallmark of any pathogen, what can we do to protect ourselves...

When choosing a cleaning or disinfection product for a healthcare facility, one of the factors...

The update means the resource now includes latest national data on how cancer diagnosis and...

Tick-transmitted brain disease may be treatable

Thinking about your supply chain solutions

Dairy maker to reset milk to net zero by 2035