Immediate use of clot-stabilising drug could save thousands more lives 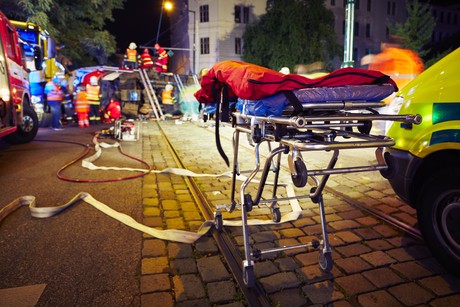 The likelihood of death due to blood loss is reduced by over 70% if the low-cost, readily available clot-stabilising drug tranexamic acid is given immediately after injury or birth.

Time is of the essence when it comes to administering tranexamic acid to people with serious injury or women with severe bleeding after childbirth, according to a study of over 40,000 patients published in The Lancet.

Whilst the study found that the likelihood of death due to blood loss was reduced by over 70% if the clot-stabilising drug was given immediately after injury or birth, chances of survival fell by 10% for each 15-minute delay, with no benefit seen after 3 hours.

“Responding quickly can be the difference between life and death, and that means patients must be treated urgently at the scene of injury or as soon as the diagnosis of haemorrhage is made. We have to make sure tranexamic acid is available before patients reach hospital and whenever a woman gives birth,” said Professor Ian Roberts from the London School of Hygiene & Tropical Medicine, who initiated the study.

Every year, more than 2 million people worldwide die from traumatic extracranial bleeding, often as a result of road traffic injuries and violence. Furthermore, post-partum haemorrhage (excessive bleeding after childbirth) is the leading cause of maternal death worldwide, killing around 100,000 women a year.

Antifibrinolytic drugs such as tranexamic acid, aminocaproic acid and aprotinin work by stopping blood clots from breaking down and reducing bleeding. They have been used for many years to reduce heavy menstrual bleeding and are often given during surgery to reduce the need for blood transfusions.

This new study builds on previous research from the WOMAN and CRASH-2 trials which showed that tranexamic acid cut deaths due to post-partum haemorrhage and bleeding after serious injury by about one-third if given within 3 hours of bleeding onset.

The authors explained that because treatment delay may be underestimated in trauma (many injuries are unwitnessed), and overestimated in post-partum haemorrhage (birth is taken as the time of bleeding onset), they did sensitivity analyses to test a range of plausible errors. Their results support the conclusion that prompt treatment is essential.

The authors also noted that their systematic review identified a total of 13 trials on tranexamic acid conducted between 1946 and 2017, but the ones included in this meta-analysis were the only two trials to assess the impact of time to treatment on treatment effectiveness.

Professor Roberts explained: “Tranexamic acid is safe, cheap, easily administered and does not need to be refrigerated. Most haemorrhage deaths occur within hours of bleeding onset. Prompt treatment has the potential to save thousands of additional lives worldwide every year.

“Given the importance of early treatment, time from bleeding onset to early treatment should be audited and communicated to healthcare professionals. Establishing national or regional quality improvement initiatives, with best practice benchmarking of time to treatment, might improve survival. More research is needed to improve our understanding of the mechanism of action of this lifesaving treatment.”