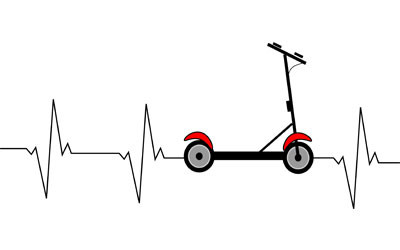 The city of Auckland in New Zealand has seen an increase in hospitalisations since the introduction of electric scooters (e-scooters) in October 2018. A University of Auckland study has discovered that injuries from e-scooters in the Auckland region have cost the health system more than NZ$1 million in less than one year.

In October 2018, the city of Auckland introduced Lime scooters, an app-driven e-scooter sharing service designed for easily navigating urban streets and reducing traffic. In New Zealand, e-scooters are permitted when used on a footpath or road, except in designated cycle lanes. When on a footpath, e-scooter users must ride in a careful and considerate manner, at a speed that does not put other footpath users at risk, and give way to pedestrians and drivers of mobility devices. When on the road, e-scooters must be operated close to the edge of the roadway. Although recommended, a helmet is not legally required to be worn when using an e-scooter.

A study conducted by a team of researchers from the University of Auckland’s Faculty of Medical Health Sciences has demonstrated that e-scootering has resulted in hundreds of injuries requiring hospital attendance, and it’s putting financial pressure on the healthcare system. Over a seven-month period, the study found that e-scootering injuries cost the Auckland region upwards of NZ$1.3 million. The results of the study are published in the journal Injury.

Data obtained from Auckland District Health Board and New Zealand’s Accident Compensation Corporation (ACC) reported a total of 770 e-scooter-related injuries between October 2018 and April 2019, including GP visits and hospital attendances.

Males made up 56% of those injured in e-scooter accidents, with riders ranging from seven to 78 years old. The most common injuries were lacerations, strains, sprains and bruises — but almost 5% (12 people) had concussion or brain injury.

Alcohol was thought to be a factor in 26.8% of cases presenting at the emergency department of Auckland City Hospital.

“With 26.8% of injured e-scooter riders in this study thought to have consumed alcohol, a motorised narrow platform on wheels, no helmet and alcohol is a dangerous combination.”

Data from Auckland City Hospital showed that 90% of injuries were due to loss of balance, which included riding at excessive speed. Vehicle collisions accounted for only 1.6% of injuries requiring hospital treatment. Two out of the 246 presenting to hospital were injuries to pedestrians from e-scooter collisions.

Since the introduction of e-scooters up until April this year, the study estimates 60 injuries per 100,000 trips to hospital.

“Based on the approximate number of e-scooters in the Auckland region, we estimate that healthcare costs per e-scooter is likely to be at least a factor of 10 higher than the current licensing fee per e-scooter,” study co-author Dr Mark Bekhit said.

Of the 770 people injured, 246 (31.9%) presented to Auckland City Hospital’s emergency department, with 75 (30.5%) of those requiring admission and inpatient care. 49 (19.9%) people required at least one operation and 105 (42.7%) needed specialist follow-up care. Hospital presentations as a result of injury from e-scooters claimed a total of 5569 bed hours in Auckland, costing Auckland City Hospital NZ$608,843 over a six-month period.

Auckland City Hospital has borne the brunt of treating e-scooter injuries due to its central location. Of 75 people admitted to this hospital, 49 (19.9%) required an operation, and in some cases multiple surgeries. A total of 99 people had at least one fracture; some had multiple fractures.

Study lead Associate Professor Colleen Bergin from the faculty’s School of Medical Science said the impact of e-scooters since they were introduced last year has been significant.

“Including admission, follow-up care and radiological imaging, these figures show the extent [to which] Auckland City Hospital is bearing the brunt of increased costs due to e-scooter injuries,” she said.

The study found that the combined cost for the whole Auckland region from GP visits, hospital bed hours or ACC claims from e-scooters was NZ$1.3 million over seven months.

In Australia, e-scooter laws vary according to state. In NSW, South Australia and the ACT it is illegal to ride an e-scooter unless on private property. Western Australia, Tasmania and Victoria have <10 km/h speed restrictions on e-scooters. In the NT, e-scooters are classed as motorised vehicles and thus must be registered to be used on roads or in public places.

Like Auckland, Brisbane introduced Lime e-scooters to the city’s residents towards the end of 2018. On a trial basis, e-scooters in Brisbane can travel at a maximum speed of 25 km/h and can only be used on footpaths. Riders must wear an approved helmet. Brisbane City Council has agreed to extend Lime’s trial permit to the middle of 2019; however, this has come under question following several accidents and injuries.

e-scooter laws vary in other parts of Queensland, where Lime scooters are not currently legal.