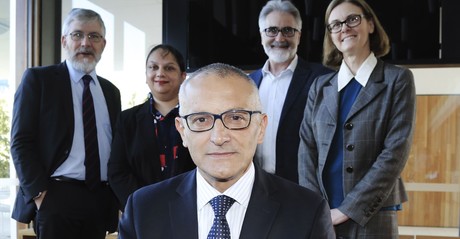 Researchers at the Australian Nuclear Science and Technology Organisation (ANSTO), the University of Wollongong’s Centre for Medical Radiation Physics and Japan’s National Institute of Radiological Sciences have been investigating carbon ion therapy, an advanced form of cancer treatment being proposed for introduction in Australia. Their study analysed the use of a beam of positron-emitting radionuclides for the precise delivery of non-invasive and highly conformal radiotherapy.

Particle therapy using heavy ions such as carbon delivers a highly targeted peak dose of therapeutic radiation at a specific depth that coincides with the treatment region. Most of the energy is deposited within a very narrow depth range, minimising damage to surrounding healthy tissue.

“It is essentially a process in which a high-energy particle beam delivered from a high-tech accelerator can very precisely deliver a dose of radiation targeted to a tumour, matching its shape and size,” said ANSTO CEO Dr Paterson.

“Carbon ions are accelerated to 75% the speed of light and then directed down a beamline with submillimetre accuracy into the tumour, to destroy the cells with near-perfect precision.

The researchers found that the radioactive beam matched the therapeutic performance of current non-radioactive heavy ion beams but offers an improved ability to verify the delivered dose distribution during treatment, through the use of in-beam PET imaging. As noted by ANSTO’s Dr Mitra Safavi-Naeini, a co-author on the study, “The mechanism provides a potential way to experimentally verify that the actual delivered dose is the same as the treatment plan in real time.”

The study compared the use of stable ions and radioactive ions to positrons for PET imaging and found the radioactive beam greatly outperformed the stable beam. A comparison was undertaken using ions at different energy levels in several phantoms (simulated human tissues and organs).

The radioactive ion beam was found to have a relative biological effectiveness (RBE) within 4% of the stable beam, showing that it was therapeutically equivalent. Dr Safavi-Naeini noted, “If you can deliver a radioactive beam with the correct fluence, the appropriate number of particles at the right energy to the target, then you should be able to use it therapeutically.”

Using a beam of positron-emitting radionuclides has advantages over a stable ion beam, as it enhances the signal and provides better visualisation of the deposited dose distribution. While most of the heavy ions in the beam stop and deposit their kinetic energy close to the planned target depth (at the site of the tumour) without undergoing a nuclear interaction, a fraction will collide with nuclei in the target, producing a range of nuclear fragments.

Some of these fragments are unstable, and decay via positron emission over the next few seconds to minutes. These positrons annihilate with electrons in the target and produce pairs of gamma rays, which can be imaged during and immediately after treatment. Furthermore, the use of a beam of ions which are, by themselves, short-lived positron-emitting radionuclides increases the number of positrons emitted in the target region, leading to a better-quality image.

“The approach could reduce the time needed for post-treatment PET imaging while improving the accuracy of the result, both leading to better patient outcomes,” said Dr Safavi-Naeini.

ANSTO is supporting the introduction of a National Particle Therapy and Research Centre in Australia in association with leading hospitals, research centres, universities and industry. The organisation believes a national centre would provide Australians with access to the latest in cancer treatments, delivering proton therapy and cutting-edge carbon therapy which is being used around the world to improve outcomes for patients with previously untreatable cancers.

“A national particle therapy and research centre would help thousands of Australians, now and into the future, by ensuring there is an ongoing research component.

“We are already making progress on the business case, and will be liaising with the federal and state governments to make this innovative treatment and research approach available to Australians.”