Bringing rare disesases to the fore 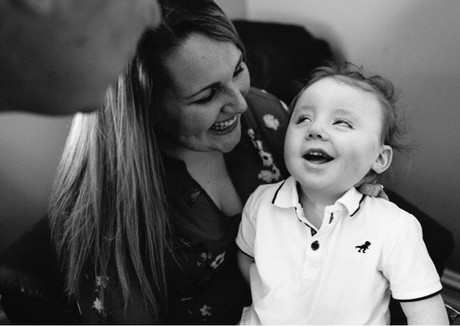 Many families spend years trying to find an explanation for the symptoms of a rare disease: the average time to diagnosis is seven years. A definitive diagnosis gives families a name, an answer and the ability to focus on treatment.

Diagnosis offers patients and their families the chance to connect with others across the world and share experiences. These communities offer a pillar of support during periods of struggle or uncertainty.

Renee Swannack won’t forget the day her son Damian was diagnosed with KCNA2 epileptic encephalitis at just 11 months of age, making him one of approximately 50 people in the world knowingly living with this rare disease.

For Renee, the diagnosis was a bittersweet moment. She and her husband Steve had been searching for answers to explain why Damian was suffering from hypersensitivity to light, sound and touch, causing him to have seizures since the age of 3.5 months.

The couple explored genetic testing after finding no physical explanation through MRIs and lumbar punctures. After being diagnosed, doctors explained that Damian’s condition affected the way potassium channels within his brain conducted electrical impulses, explaining his difficulties in talking, walking and obtaining any use of his muscles, including being able to fully support his own head.

Amazingly, Damian was born with control over the muscles required to smile, showcasing his cheeky and joyful nature. His family believes his smile is his superpower, with which he can melt the hardest of hearts.

Since his diagnosis, Renee and Steve have launched the KCNA2 Epilepsy Alliance to raise awareness of the rare disease and to make sure that no other parent is alone on their journey. They credit having a tribe of parents who ‘get it’ as easing them into their new reality, while also providing hope for Damian’s future through advice and recommendations. 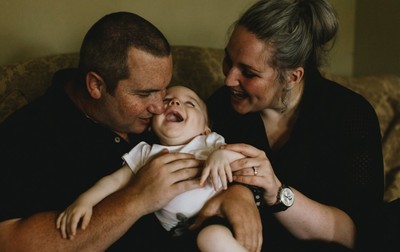 Damian with his parents, Renee and Steve.

What circumstances led to doctors believing Damian might have a rare disease?

Damian was born with an extreme startle (moro) response. His entire body would tremor as if he were getting a fright (in response to light, sound and touch) except it was as if he was unable to stop, so would continue screaming and startling until the trigger stopped. His screams would cause his diaphragm to seize and affect his oxygen intake.

At 3.5 months Damian begun having infantile spasm seizures — his MRI and lumbar puncture came back totally clear, which triggered the doctors to step up their search for a diagnosis and led them to genetic testing.

Once you received the diagnosis of KCNA2 Epileptic Encephalitis did you feel that you received adequate support?

I did. The geneticists and genetic counsellors we spoke to were very helpful with what limited information they actually had to share and offered follow-up appointments should we have further questions or wish to discuss family planning. Our geneticist also explained there was an existing parent support group on Facebook should we wish to connect to other parents.

How have you connected with other families who have a child with KCNA2 Epileptic Encephalitis and how important has this been to you as a family?

This has been hugely important for us — having that Facebook page with other families to discuss treatments and therapies has been so helpful, also having access to day-to-day life information and advice has been huge. Our children tend to have all sorts of other sensory issues which aren’t reported in studies — being able to share that information and ask for advice is so important. Having a group of people who understand the struggles our kids go through, as well as celebrating the good days together, makes this journey we’re on so much easier.

Damian has the rarest KCNA2 variant, which is a gain and loss of function. We met another little boy and his family with the identical variant last year when they visited from the US: that was such a surreal experience. I’d never met a child as complex as my own, let alone with the exact same rare condition. It was a beautiful few days together.

What helpful advice have you received from the rare disease community?

That things will get easier, the early days are the toughest and that finding peace with our children’s diagnosis takes time.

Tell us about the process of establishing the KCNA2 Epilepsy Alliance and the work you hope to do via the alliance?

I met the one other KCNA2 mum in Australia at the 2019 Melbourne GETA conference. Meeting one another was amazing, and really emphasised how important connection is within the rare disease space.

We were so motivated by the amazing things going on within the epilepsy community — the research and initiatives taking place right here in Melbourne — that we decided we needed to raise KCNA2 awareness in order to stand out in the crowd and hopefully attract the attention of specialists and researchers. Most importantly, to help other newly diagnosed families find us.

No other family should have to go through this alone. We established a public Facebook page and website in order to share information and help raise awareness. My heart explodes when new families find us via Google searches.

What advice would you give to parents who are still searching for answers to unexplained symptoms in their children?

Keep searching. Push for genetic testing and if those test results come back inconclusive don’t lose hope. KCNA2 was only discovered in 2015. Families with children tested prior to this time also had no answers. Now they do. Not only do they have a genetic explanation, they also have their own little extended KCNA2 family waiting for them.

If people receive a result but can’t find a community relating to the diagnosis, I encourage them to start a Facebook group and wait — you never know what other families are out there alone and in the same situation.

We have come a long way in our ability to diagnose rare diseases. Not so long ago parents would be left with no explanation for their child’s symptoms. Today, genomic testing can be used to provide a diagnosis.

KCNA2 epileptic encephalitis is associated with very high rates of treatment-resistant epilepsy, severe developmental delays and mortality. The condition is a huge burden on families and the health system.

Until the advent of genomic testing, the underlying cause of severe epileptic seizures would not be found. This would mean extensive testing for other causes; unending diagnostic odyssey; an inability to provide accurate reproductive counselling to families wanting more kids; an inability to tailor treatments to the underlying condition; and reduced ability to prognosticate and join condition-specific support groups.

Since genomic testing, all of the above have changed considerably. In children with severe infant-onset epilepsies, the diagnostic yield of genomic testing is >30% and is cost-effective and useful for the patients and their families. Renee’s son Damian was tested fairly early in life and received a diagnosis when he was young, which has impacted on several of the abovementioned factors in a positive way.

Genomic testing is now being used earlier in the diagnostic process than in the past. In certain severe cases, genomic tests will be undertaken straight up rather than progress through a series of other tests such as MRI scans and invasive chromosomal testing.

Identifying the underlying cause of severe infant-onset epilepsies via genomic testing means that, in some cases, seizure medicines can be prescribed. Although this is not a cure, it can alleviate symptoms in some cases.

It is worth noting that, even though many positives come out of receiving a diagnosis, there are still no cures and most don’t yet have targeted treatments. However, changes are occurring in this landscape, with targeted treatments in development, including some antisense oligonucleotide-based treatments. Rare disease groups have played an important role in raising awareness and driving research forward.

This Rare Disease Day — 29 February 2020 — Australians are encouraged to share a photo on their social pages with painted hands, using the hashtag #RareDisease Day, to show the support for those living with rare diseases.