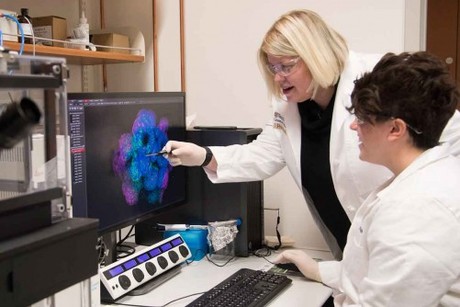 Immature stem cells have been used researchers at Washington University School of Medicine in St. Louis and the University of Pittsburgh to create a miniature model of the gut in the laboratory. The study, published in the Proceedings of the National Academy of Sciences, demonstrates how infection-causing enteroviruses enter the intestine.

Enteroviruses cause millions of infections each year worldwide and can spur flu-like symptoms or more serious conditions such as inflammation in the brain or heart, acute paralysis or even death. Enterovirus infections within neonatal intensive care units (NICU) can be particularly devastating with infant fatality rates approaching 20%.

“This study not only provides important insights into enterovirus infections but also provides an important model that could be used to test the efficacy of antienterovirus therapeutics in the premature intestine,” said Misty Good, MD, an assistant professor of paediatrics at Washington University School of Medicine in St. Louis and co-senior author of the study.

Researchers isolated stem cells from a premature infant’s small intestine and created ‘mini-guts’ in the laboratory as a model to see how the virus behaves in the intestine. This model replicates various cell types within the tissue found in the intestine.

Researchers also found that E11 targets certain cells within the gastrointestinal tract and may allow passage of the virus into the bloodstream, which can result in serious illness.

“Despite their major global impact, especially on the health of children, little is known about the route that these viruses take to cross the intestine, their primary point of entry,” said co-senior author Carolyn Coyne, PhD, an associate professor of microbiology and molecular genetics at the University of Pittsburgh School of Medicine. “Our approach has for the first time shed some light on this process. This model also could be used for developing antienterovirus therapeutics targeting the gastrointestinal tract, given that no therapeutic approaches exist to combat infections of these viruses.”

Said Gary A Silverman, MD, PhD, the Harriet B. Spoehrer Professor and the head of the department of paediatrics at Washington University: “This research has the potential for a positive global impact on human health, especially since enteroviruses cause disease in all human populations and age groups.”

Washington University's Misty Good, MD, and research technician Alexa Bolock examine an image of an enteroid, a 'mini-gut' they and other researchers grew in the lab. Credit Robert Boston.