Can robots really be companions for older adults? 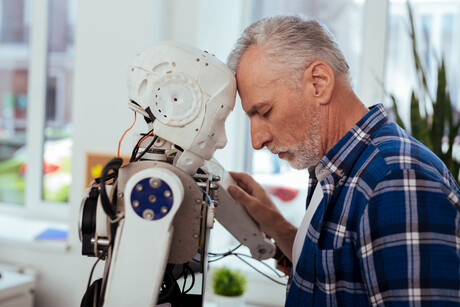 Social isolation is a problem for many older adults, but are social robots an answer — and what do our elderly people think?

The New York State Office for the Ageing recently announced plans to distribute ‘robot companions’ to more than 800 older adults in the state.

The plan aims to “battle social isolation” by providing older adults with robots that can initiate conversations, play games and provide general support.

The ElliQ, a smart speaker with a moving head, is a possible way to help address social isolation among the elderly.

Social isolation is the experience of having insufficient opportunities for human contact and companionship. Although not limited to old age, social isolation can be a problem for some people as they get older and experience reduced mobility or live away from family members and friends.

For some, the COVID-19 pandemic has exacerbated experiences of isolation and loneliness.

Can robots be companions and should they?

The robot in question is ElliQ, a smart speaker with a moving ‘head’ that turns to face the human speaker and lights up when talking. Featuring artificial intelligence, ElliQ was made by start-up Israeli company, Intuition Robotics, and is designed to provide support for older adults living alone.

ElliQ also has a pro-active ability to engage users in small talk.

It appears to show ‘empathy’, can suggest activities and reminds people to take medication or attend appointments. It’s accompanied by a touchscreen that allows video calls to friends and family.

The New York State Office for the Ageing website claims that users typically have about 20 daily interactions with the robot.

But using robots for companionship is controversial. Some people worry about replacing human love and care with robot ‘care’. Others worry that robot companions might deceive people about the fact that they are merely machines not conscious beings.

There are also concerns about loss of privacy given the data collected by social robots.

The Office for the Ageing clearly hopes that robot companions will benefit older people, as well as perhaps reducing medical and housing expenditure for older demographics. It says that ElliQ is meant to complement human relationships, not replace them.

But what do older people themselves think about companion robots?

We conducted a small study, interviewing 16 older people to find out their views about ElliQ and other robots designed for companionship, including robot pets.

We found that some older people are enthusiastic about robots like Elli-Q that provide meaningful information and activities. Some older people could even imagine having certain robots as companions.

However, other older people reacted negatively.

Some found that the way ElliQ piped up and made suggestions for activities or video calls to family was rude, intrusive and controlling. It was offensive to be “told what to do,” as one participant put it.

Other study participants worried that having a robot assistant might make them lazy and less capable. As one person said: “I’d rather not rely on a machine when I can think myself.” It will “shrink our brains,” another warned.

These sentiments are at odds with the intention of helping older people to be more autonomous.

For certain individuals, some smart technology seems to represent a threat to cognitive and social independence. One interviewee said they would pitch ElliQ “out the back door”.

Some reacted negatively to robot companions, as suggesting they were less capable than they felt they were.

Some older people were put off by the way the devices were designed to mimic human-like qualities and behaviours. They pointed out that living humans, and animals like dogs, genuinely love or care for people, whereas robots only pretend that they do.

As a result, some older adults felt that humanoid and animal-like companion machines were patronising. In fact, some felt the idea of marketing certain social robots towards older people was condescending to the entire demographic.

We can’t then ignore the potential for some older people to reject robot assistance and companionship.

Nonetheless, some older people in our study embraced the idea of having a robot like ElliQ to assist them in tasks and provide conversation to ease loneliness.

Others were delighted at the thought of robot animals. They even felt there was some value in the artificial “empathy” and “compassion” that these robots might show.

Programs like New York’s need to be alert to various concerns about rolling out robots, including concerns they may replace genuine human and animal contact. But it also seems true that some older people benefit from certain kinds of AI assistance and robot companions.

Our study shows that older people, like other age groups, have a variety of views about companion robots — both positive and negative. It’s important to hear their perspectives when designing and deploying social robots to address social isolation in this growing demographic.

This article was first published on Pursuit. Read the original article.

It's been one year since the Royal Commission into Aged Care Quality and Safety handed down...