When survival comes down to the hospital food 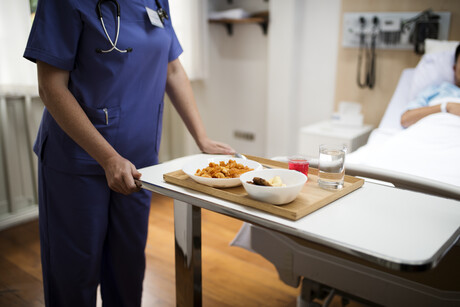 When hospitalised with chronic heart failure (CHF), survival could come down to the hospital food. This was the finding of a Swiss study — EFFORT (Effect of early nutritional support on Frailty, Functional Outcomes and Recovery of malnourished medical inpatients) — published in the journal JACC.

Eight secondary and tertiary hospitals in Switzerland participated in the study, following a total of 645 patients with chronic heart failure at risk of malnutrition. Patients were screened for risk of malnutrition using the Nutritional Risk Screening (NRS) tool, to assess nutritional status and disease severity.

Adult patients with an NRS total score of  ≥3 points, and an expected length of stay of >4 days, were included in the study. Half of the patients were given individualised nutritional support to reach energy, protein and micronutrient goals (intervention group), while the other half were given regular hospital food options.

To reach micronutrient goals, each patient in the intervention group followed an individual nutritional plan developed by a trained registered dietitian. The hospital kitchens made food adjustments according to patient preferences, fortifying hospital food by strategies such as adding protein powder. Patients were also provided with snacks between meals and were given oral nutritional supplements. To further increase nutritional support, enteral tube feeding or parenteral feeding was recommended if at least 75% of energy and protein targets could not be reached via oral feeding within five days. During the patients’ hospital stay, nutritional intake was reassessed every 24 to 48 hours by a trained registered dietitian.

The study also reported that patients in the intervention group had a lower risk for major cardiovascular events at 30 days.

The researchers commented that the data supports malnutrition screening of patients with CHF at hospital admission, followed by an individualised nutritional support strategy.

A new study reveals that people with intellectual disability are being hospitalised for...

An evidence-based app — YourTime — has been developed to help women track their...

On the heels of National Reconciliation Week, the Johnson & Johnson Family of Companies has...

Pharmacogenomic approach to cure the pain of the 'burning man'

SWA launches campaign to combat lung disease in the workplace