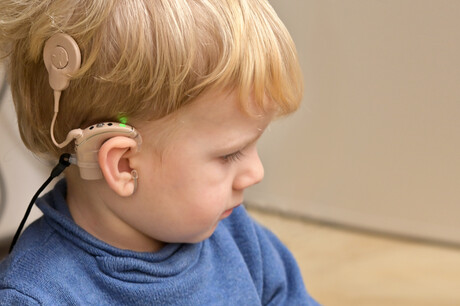 A new moisture test for bionic devices has been developed by applied physicists at the University of Sydney, with the researchers proposing new standards to measure moisture leaks into bionic devices such as pacemakers, cochlear hearing implants and retinal replacements.

Bionic implants must be able to operate successfully in moist environments in the human body. While large leaks into the devices are easy to detect during manufacturing, small leaks can escape detection and standard testing is required to ensure safety and prevent moisture-induced failure.

The research team — which received industry partnership funding through the Australian Research Council — said the new moisture standards could give wearers of bionic implants extra confidence in the operation of their life-changing devices.

“The accurate measurement of moisture penetration into medical devices is essential to guarantee long-term performance,” said Professor David McKenzie, from the School of Physics at the University of Sydney. “Accurate measurement needs an accurate industry standard to assess leak risks.”

He said there are commercially available systems that measure relative humidity, but these are not sensitive enough for the most demanding applications in implantable biomedical devices. Using mass spectroscopy technology, the measurement of helium as a proxy for moisture leakage is a de facto industry standard test for the critical small leaks that are hard to pick up.

“In practice and in most cases, helium testing of bionic devices is a good standard but, by improving the compliance by a factor of 10, we think the industry can further guarantee the safety of biomedical implants,” Professor McKenzie said.

“Helium leak detection tests are widely used for the location of more sensitive leaks, but direct measurement of gaseous or liquid water leakage at similar sensitivities has proven too difficult until now.”

Professor McKenzie and colleagues from the National Measurement Institute have developed a standard leak test and shown how to use it to verify the quality of encapsulations, or the containment of medical devices. The findings are published in the American Chemical Society’s Applied Materials & Interfaces.

Lead author Dr Wenwen Lei, from the National Measurement Institute, said, “For very high sensitivities, it is important we try to directly measure water leak risks rather than the de facto measure of helium, which is not as accurate.

“Water has special abilities to penetrate through very small spaces, given its different behaviour. For instance, it has been recently discovered that water acts in a really weird way in carbon nanotubes, where the water does not seem to touch the sides of tiny passageways not much wider than a millionth of a human hair.”

Professor McKenzie added, “Any such ‘nanoleakage’ would be really serious if it happened in medical devices, especially those with lots of feedthrough apertures, such as the bionic eye.”

Given their findings that water can leak at up to 10 times the rate of helium, the researchers propose strengthening the compliance standard for helium testing of biomedical devices 10-fold, or one order of magnitude.

“As we improve bionic technology, wearable implants will become more common, so it’s important to give people that extra level of safety assurance,” Professor McKenzie said.

The analysis, carried out as part of an international collaboration between Australian, Finnish...

The Nursing and Midwifery Office (NMO) has announced 30 finalists for the Excellence in Nursing...