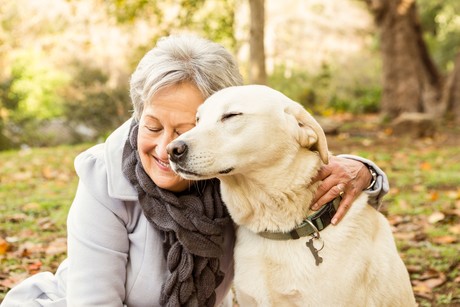 It’s hard to ignore a dog that wants to go for a walk — and for the elderly, giving into those ‘puppy eyes’ is good for their own health, too, suggesting community dog walking schemes could benefit this age group.

Taking the dog out for a walk boosts older people’s physical activity levels — whatever the weather — and seems to lop an average of 30 minutes off their daily sitting time, suggests research published online in the Journal of Epidemiology & Community Health.

In light of their findings, the researchers suggest that dog ownership or community schemes for dog walking could form part of exercise on prescription for this age group.

As adults age, they tend to become less active; in the UK alone it is estimated that less than half of older adults engage in the recommended weekly quota of at least 150 minutes of moderate-intensity physical activity.

To find out if dog walking might motivate older adults to become more active, the researchers used data from the European Prospective Investigation into Cancer and Nutrition (EPIC).

Between September 2006 and December 2011, a sample of 3123 adults aged between 49 and 91 (average 69.5), were asked to wear a pedometer for seven consecutive days during waking hours and provide information on regular physical activity.

They were also asked whether they owned a dog and, if so, how often they took it for a walk.

All in all, dog owners who regularly walked their pets were more active and less sedentary, including in poor weather conditions.

“Our findings hint at the important additional role of extrinsic motivation — in this case, the need for the dog to be exercised even in poor weather,” the researchers wrote.

They suggested that their findings “may have considerable potential to support the maintenance of physical activity in older adults and could form part of exercise on prescription schemes”.

They acknowledged that older adults’ health or living conditions might limit their opportunities to walk a dog to boost their physical activity levels.

They also suggested: “In cases where dog ownership is not possible but where the functional status allows, dog walking opportunities for older adults who do not own a dog could be organised by local community organisations or charities, and dog walking groups may provide wider wellbeing benefits associated with increased social contact.”

Borrow my Doggy, a nationwide UK network which provides regular group dog walks for people who aren’t dog owners, might be one such option, they suggested.

SD-WAN picking up steam in Australia