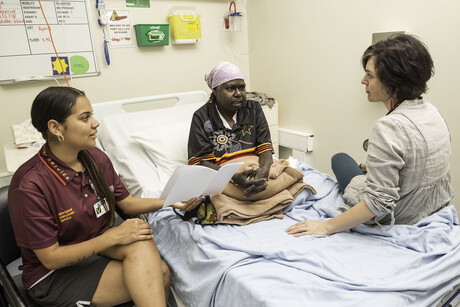 A study conducted at Royal Darwin Hospital (RDH) has found that increased use of Aboriginal interpreters was associated with a decrease in patients leaving treatment early.

Publishing results in the Medical Journal of Australia, The Communicate Study is aiming to improve communication to provide positive health outcomes for Aboriginal patients who do not have English as their first language.

The study began in 2015 and now includes the employment of an interpreter coordinator, working with interpreter training for doctors and encouraging clinicians to use interpreters.

Initial results of the study have shown a significant increase in interpreter bookings and a decrease in self-discharges at RDH.

“The study showed that health systems changes implemented in partnership between Menzies, RDH and the Aboriginal Interpreter Service resulted in increased uptake of Aboriginal interpreters.

“The link between the increase in interpreter use and the decrease in self-discharges has long been speculated about. When people understand more about the need to stay in hospital and feel better supported in the hospital, which can be achieved using better communication and language interpreters, they are less likely to self-discharge.

“Self-discharge is a bad outcome since it prematurely terminates care, can lead to homelessness for people who had been flown in from remote settings and is associated with increased healthcare costs due to resulting re-admission and worse health outcomes due to delayed or interrupted treatment,” Professor Ralph explained.

The next stage of the Communicate Study will involve rolling out and evaluating podcast-delivered cultural education for healthcare providers to ensure healthcare providers are better equipped to deliver culturally safe care and exploring ways to increase interpreter availability at RDH.