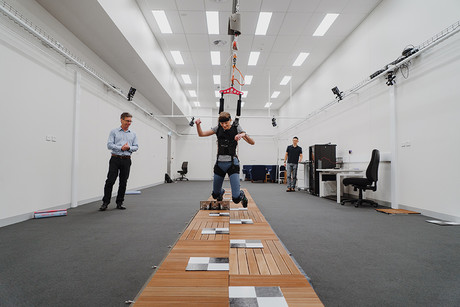 A unique Australian program designed to help Parkinson's sufferers reduce the risk of tripping and falling is having encouraging results.

The program, reported on in the Journal of Gerontology: Medical Sciences, incorporates reactive balance training that has shown a 60% risk reduction in falls due to trips and slips in older adults.

Run by researchers at Neuroscience Research Australia (NeuRA), the program is now being replicated to help those with Parkinson’s disease, and early indicators look promising.

The reactive balance training program works on a retraining-the-brain protocol developed from learning on a purpose-built slip-and-trip walkway. Participants, supported by a safety harness, walk along a pathway which has a series of unexpected booby traps — boards spring up to cause a trip and sliding tiles create a slip — to which the brain and the body need to respond quickly. The learned response mechanism helps to retrain the brain to stay agile, respond faster to potential hazards and correct its balance to prevent a fall.

NeuRA has replicated the slip-and-trip study to reduce falls risks in people with Parkinson’s in a study called SAFE-PD, which is already showing promising results.

More than 80,000 people are living with Parkinson’s disease in Australia, and of these, approximately two-thirds will fall each year, resulting in injuries, hospitalisations and even death, which is devastating, widespread and costly. The prevalence of Parkinson’s disease is expected to double between 2010 and 2040, and the associated human and economic burden will also grow.

NeuRA’s goal is to develop innovative therapies to improve balance and prevent falls in people with Parkinson’s, such as the SAFE-PD Study.

Commenting on SAFE-PD, Professor Stephen Lord said there have been improvements in the balance and gait of the participants with Parkinson’s disease using the SAFE-PD program.

“The early results are in line with the success of our published study, which is encouraging because we know that falls in people with Parkinson’s are widespread and often devastating,” he said.