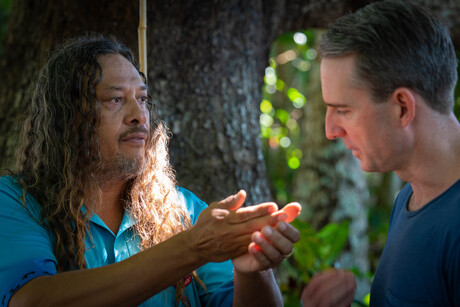 The Australian Digital Health Agency has released a new video showing the importance of bush medicine in Indigenous culture and health, and how My Health Record can be used to manage that information for the holistic care of patients.

“I ask my patients what bush medicines they are using and include that information in the medical records in our clinic, and this feeds into My Health Record,” said Dr Jason King, a Yued Noongar man from Dandaragan, WA, and Director of Clinical Services and Senior Medical Officer at Gurriny Yealamucka Health Service in Yarrabah, Queensland.

The Agency’s new video marks NAIDOC Week 2021 (4–11 July) and features Linc Walker, owner and tour guide at Kuku Yalanji Cultural Habitat Tours in Cooya Beach, north of Port Douglas in Queensland, and pharmacist Brad Reilly from Live Life Pharmacy in Port Douglas. The tours have been running for 22 years and were started by Walker and his brother Brandon to help preserve ancient cultural activities and knowledge.

“We use traditional medicine because we’ve always used it. When we were young it was too far to town, the shops were too far away and so we had to do this. It’s part of our life still,” Walker said

“Our cultural activities have so much value and we didn’t want to lose it. We started learning from all of our elders, taking the information and the knowledge and developing it for today and for the future.”

In the video, Walker welcomes the opportunity to team up with Reilly, to show him a range of local bush medicines and describe their applications, including the use of green ants to make three different medicines for sore throat and breathing problems and the white fruit of beach lettuce squeezed softly for an eyewash or skin wash.

Reilly said it was an amazing experience learning from Walker, someone who knows so much about the local area.

“What a lot of people don’t know is that some of the medicines we use day to day here in the pharmacy have their origins from the plants and animals in the lands around us,” he said. “Just because we’re taking it from the pharmacy shelf as a packaged medicine and dispensing it to patients doesn’t dismiss the original source of our modern medicines.”

He marvelled at some of the medicines Walker revealed to him, ranging from treating common warts with a frangipani tree to calming stomachs with the beach hibiscus leaf. When the wattle flowers are on and mullet are fat, mullet soup oil is used by elders when they are sick and sore with aching joints. Reilly suggested the fatty acid in the fish oil is working as an anti-inflammatory.

“It’s fascinating how Walker is able to bring plants and animals from the local area into a medicines context,” he said.

Walker added, “There is a great opportunity for our mob to put this information into My Health Record, to get it down and documented. We’ve never had this opportunity and we’ve never been asked before and it can only better the health of our people. This is an opportunity for people to record information that they can use in the future. For our mob, this is just the start.”

Dr Jill Benson AM works in Aboriginal health and said the Eremophila plant species, or emu bush, is widely used by Aboriginal people across Australia to treat aches and pains as well as minor burns and skin infections.

Australian Digital Health Agency CEO Amanda Cattermole said, “Aboriginal and Torres Strait Islander people can upload their uses of bush medicine to My Health Record by including it in their personal health summary.

“This information can be used by healthcare providers to better understand and treat patients and help preserve key cultural heritage.”