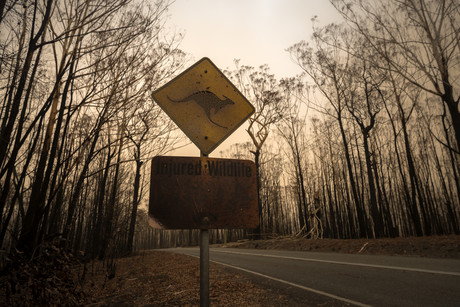 In summer 2019, Bianca fled her home on the first sight of a catastrophic fire warning on her mobile phone, which — still to this day — she never leaves out of sight.

Resisting the fight element of her fight-or-flight state, Bianca, mother of two young children, had no choice but to take shelter in nearby Sydney for the days that followed. Meanwhile, her neighbours stayed and fought huge behemoths of flames, surrounding their once leafy Blue Mountains suburb.

Returning to her neighbourhood — a charred landscape — Bianca (a prolific writer on the subject of mental health) knew it was wise to keep an eye on her unfolding psychological and physical symptoms.

Post-traumatic stress disorder (PTSD) comes in many forms, and in delayed-onset cases can begin months or even years after the initial trauma.

Some of its forms, like acute stress response — associated with car crashes and other catastrophic events — are well known among the general population and healthcare community. Others, like complex PTSD — a condition arising from ongoing exposure to cumulative trauma, like that experienced in domestic abuse or evacuation — aren’t as well understood. Similarly, some side effects, like flashbacks, are commonly recognised, whereas others — like paranoia, dissociation and shame — are lesser known, albeit equally damaging.

Bianca was traumatised by her experience. Her sustained periods of anxiety, night-time panic attacks and hyper-vigilance seemed unrelated to her bushfire encounter, but thankfully her mental health literacy enabled her to recognise these early PTSD symptoms in good time and seek specialist help.

“It’s strange because the content of my thoughts was seldom about the evacuation experience,” she told Hospital + Healthcare.

“I was in a constant state of angst and wouldn’t have known why. But my underlying PTSD knowledge told me these symptoms were in fact a trauma response. A professional diagnosis later confirmed this to be true.”

Complex trauma specialist and President of the Blue Knot Foundation Dr Cathy Kezelman said, “We hear so much about PTSD in the media, but most of this is centred around a narrow definition of its most common form.

“We imagine it will be obvious if we — or our patients — are experiencing PTSD or a more complex trauma response, when in reality the manifestations can present subtly and build gradually over time. They can also mimic or co-occur with other conditions, like anxiety or depression.”

Cost of inappropriate or under treatment

“I was prescribed a low-level antidepressant/antianxiolytic combination drug by my GP, which I took for about a year,” she said.

“It had some positive impact on my wellbeing in that it helped me to sleep. But after a year I was still struggling with overwhelming bouts of shame and feelings of self-hatred.

“I had very commanding suicidal thoughts and emotional flashbacks — where I wouldn’t recall the traumatic events per se, but rather the emotional state I felt at the time.

“The medication did little to combat that, and all of this took a major toll on my wellbeing and general health. I was close to attempting suicide on a number of occasions.”

Dr Kezelman advises that, although trauma is often complex to diagnose and treat, recovery is possible over time with the right support and targeted treatment.

Her treatment framework includes a combination of psychosocial and biomedical interventions.

“Diagnoses aside, trauma is almost always — at its core — about feeling unsafe in the world,” she said.

“To this end, support networks, talk therapy and self-soothing strategies form a major part of the response. Medication can have a role to play, but I don’t recommend it as a matter of course.”

Bianca saw a psychologist specialising in anxiety, which she said helped her enormously. Her suggestion to the healthcare community in the aftermath of one of Australia’s worst bushfire crises is to get familiar with the specific types and symptoms of PTSD.

Dr Kezelman added, “If a patient self-reports a traumatic event but appears asymptomatic, encourage regular check-ins for the weeks and months that follow, as delayed-onset symptoms may occur.

“Also consider getting specialist training on trauma. There are plenty of quality courses out there and if you don’t have trauma on your radar you are likely missing the opportunity to support patients appropriately.

“Finally, make sure that you, as a healthcare professional, are using strategies to manage your own stress response to treating traumatised people. Vicarious trauma — that experienced from witnessing or hearing about the trauma of others — can be just as damaging.”