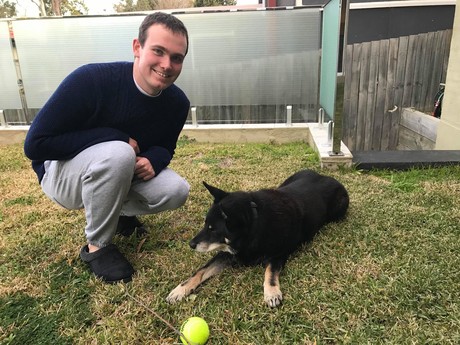 Michael Stanton, 21, was diagnosed with autism spectrum disorder (ASD) at age two. Up until May last year, he was living at home, had no job and had few interactions with friends without parental assistance. Michael’s life changed after completing a unique, 16-week program for young adults with autism: he got his first job, moved out of home to live independently from his parents and began to develop a stronger friendship network.

Michael is one of many young adults with autism around the world who have gained independence by participating in the PEERS for Young Adults program. PEERS (Program for the Education and Enrichment of Relational Skills) is an evidence-based social skills program for autistic youth and is achieving significant results for young people like Michael. People with autism often struggle to understand the social cues that would enable them to have easy and confident friendships or workplace, social and intimate relationships. PEERS changes all of that by equipping young people with the skills required to gain independence through a 16-week workshop.

Michael went through the PEERS for Young Adults program at Cerebral Palsy Alliance — a non-profit that provides services to people with cerebral palsy, developmental delay, and other physical and neurological disabilities to help them lead independent and inclusive lives. During weekly group sessions, Michael was taught straightforward ‘do and don’t’ behavioural tactics, through rehearsal exercises, role-play and performance feedback. The program involves parents, who also attend weekly sessions and help their child continue practising the learned behaviour during and after the course is completed.

Michael’s mother, Suzanne, said that when Michael finished high school, there was a clear gap in social support programs for young adults with autism. This made it hard for Michael to maintain social connections with other young people. When she and her husband, Scott, heard about the PEERS for Young Adults program through Cerebral Palsy Alliance, they encouraged Michael to enrol.

“Before partaking in the PEERS program, Michael was very reliant on my husband and I to initiate social activities for him,” Suzanne said. “He had few friends at school and did not have an interest in seeking out social opportunities. One of the biggest things the program taught Michael was to recognise the need to put in effort to build and maintain friendships. He now has the confidence to initiate social contact that he wouldn’t have done before.

“Some weeks, Michael had to travel alone from Menai to Ryde, where the program was held, and he was incredibly proud of his ability to do this independently,” said Suzanne. “Since partaking in the program, we’ve watched his independence grow, and he has got his first job in a cafe, where he has been for three months. This job is great for Michael, as it requires him to use the communication skills he acquired through the PEERS program. He’s also living independently from us on the other side of Sydney, which is a huge step, and he is initiating get-togethers with friends, such as movie nights.”

Michael at work at the cafe. Image supplied.

For Suzanne and Scott, one of the major benefits of the PEERS program has been Michael’s ability to initiate social contact without the help of his parents.

Michael agrees. “I’m so proud of the confidence I now have after the PEERS program. I now know that it’s okay to pick up the phone and call a friend for a chat. I can do it!

“I’d recommend PEERS to other young people. I learnt how to get in and out of a conversation. It also increased my independence.”

The PEERS social skills program was created by clinical psychologist Dr Elizabeth Laugeson, founder and director of the University of California, Los Angles (UCLA) PEERS Clinic, and Dr Fred Frankel, a professor of medical psychology at UCLA. It teaches social and conversational skills — including through electronic communication — such as choosing the appropriate friends and handling get-togethers, social rejection and disagreements. The program has been taught to tens of thousands of psychologists, counsellors, teachers, parents and young people with ASD in more than 35 countries, with the PEERS manual having been translated into more than a dozen languages.

From 28–30 January, PEERS for Young Adults was introduced for the first time in Australia by Dr Laugeson, in a major three-day workshop at the University of Sydney. Hosted by PEERS Australia, the aim of the workshop was to disseminate information to health practitioners and other educators to fill the gap in research-based social skills programs for autistic youth throughout Australia, whose needs are significantly unmet. Attendees who obtained certification are now qualified to implement the program across the country.

In Conversation with Christine Morgan

A Day in the Life of an Elder Clown

The cost of underemploying nurses in aged care