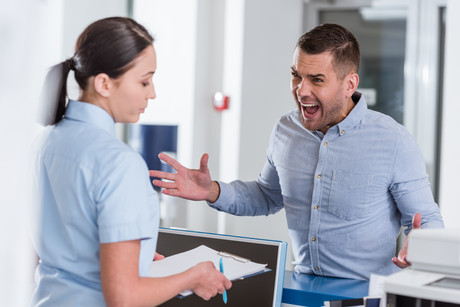 It’s Saturday night in an orthopaedic trauma ward in Sydney and nurse Melissa (name changed for privacy) has just had to elevate a code black* for the second time this month.

A 35-year-old male patient, believed to be under the influence of methamphetamine (ice) is issuing violent threats to others on his four-bedded ward. Patients, staff and visitors are terrified for their safety.

Melissa has been looking after the man for nearly three hours — tending his wounds, inserting a cannula and assisting him with bathroom visits — amid outbursts of rage and expletive-ridden insults, of which she is predominantly the target. She is also terrified, but is legally bound by a duty-of-care mandate and is unsure about her right to refuse treatment.

Violence against healthcare professionals is on the rise and is believed to be linked to the increasing popularity of violence-inducing drugs and the growth in patients presenting with acute mental health problems.

According to the American College of Emergency Physicians (ACEP), 75% of workplace assaults happen in healthcare settings. A staggering 47% of physicians have been physically assaulted at work and 50% said that other patients have also been harmed.

Like many other healthcare professionals, Melissa considers these altercations a normal part of her job.

“It goes hand in hand with the profession. I sort of come to work and semi-expect to be abused. It’s the nature of the trade,” she said.

Regardless of her attitude, she told Hospital + Healthcare that she feels powerless to effect change.

“I’ve had minimal training on conflict resolution or de-escalation,” she said. “I’ve been a nurse for four years now and am exposed to these sorts of situations frequently. Yet, I don’t feel like I’ve been given the right tools to deal with violent [or] drug- or alcohol-affected patients.”

Australia has already seen some coronial cases and civil litigation as a result of managing hospital violence and some experts are concerned that fear of legal action may interfere with safety outcomes.

“A lot of staff are unsure about whether they may be held legally accountable if a patient is harmed in a high-risk situation. For example, if a patient suffers an injury while being forcibly restrained,” said Senior Emergency Physician and Academic, Professor Anne Maree Kelly.

“They often steam ahead with medical procedures, even though they may be putting themselves in danger.

“We seem to have forgotten that staff have a right to a safe workplace under workplace safety legislation,” she said.

Kelly, who spoke recently at Informa’s Medico Legal Congress, said there are further safety concerns when it comes to balancing legal and ethical considerations in the context of the Mental Health Act and its involuntary provisions.

Speaking about the Victorian Mental Health Act she told Hospital + Healthcare, “Although the Act recognises risk, I think it has possibly underestimated the nature of risk staff and patients are often exposed to.

“On an emergency ward, patients are often brought in by police under the provisions of the Act, yelling death threats and physically lashing out at staff. These patients tend to be non-consenting, but some may be deemed unfit to make that determination.

“Here, staff will need to make quick decisions in a rapidly evolving and legally precarious environment. They will need to balance the risks of sedation, which carries a small (albeit important) risk of harm including death; restraint; as well as the need to exercise involuntary provisions.”

Aside from the direct threat to staff and patient safety, a secondary consequence of managing violent, drug-affected or non-consenting patients is reduced health outcomes.

A staggering 80% of emergency physicians believe that other patients have been affected as a result of managing workplace violence.

“It consumes so much of our time and resources,” Melissa said. “We are stretched as it is and, sometimes, we need all hands on deck when it comes to restraining people or de-escalating risky situations. Sadly, this is often at the expense of tending to other patients.”

As well as the immediate effects on patient outcomes, Melissa also reported a sense of “compassion fatigue” as a result of her ongoing exposure to these scenarios.

“Hospitals are high-stress environments and people lash out for all sorts of reasons. When you absorb that on a daily basis, it does sometimes make you lose sight of why you entered the profession. In my case, that was to help people,” she said.

“Of course, I always strive to do my job well, but when you are persecuted it can take away your ‘mojo’. And sometimes that mojo is what you need to give the best possible care.”

Melissa’s parting message to healthcare professionals is to stop normalising abuse and make sure your workplace takes safety seriously.

*In NSW the term ‘code black’ is used in a duress response to identify when a person is facing a personal threat or physical attack. It differs from the meaning of ‘code black’ in other jurisdictions.