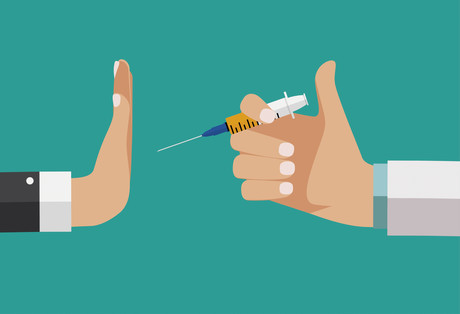 Dig deeper, and there are more risks associated with the vaccine hesitancy movement than initially meet the eye.

The risk to children’s mental health has dominated the vaccination debate since its inception; when a subsequently discredited 1998 paper — purporting to show links to autism from the MMR jab — made its way into the public sphere. The research sparked an epidemic of fear, perpetuated by a steady drip-feed of anecdotal news stories over the decades that followed.

Since then, the design of that highly publicised British study was found to be flawed and the findings invalid — confirmed by numerous follow-up papers, which found neither evidence of correlation nor causation.

But as the saying goes, “lies spread faster than the truth”, and the refuting evidence did little to sway the opinion of the masses: that the jabs were unsafe and should be avoided.

Incidentally, communicable diseases also spread fast when vaccination rates fall by even a few per cent. So fast, that a vaccine-hesitancy-inspired measles outbreak in the US recently infected 1261 citizens, causing 123 hospitalisations and complications such as pneumonia in 61 people — all within in a matter of months.

Most represented in these (and other communicable disease outbreak) statistics — and yet largely missed from the vaccine hesitancy debate — are our own parents and grandparents, who represent the “hidden risks” of the movement, said Professor Nikolai Petrovsky, an international vaccine expert based at Flinders University.

“It’s no secret that, as we age, our immunity tends to decline, caused by a shrinking thymus, declining T-cell and macrophage function, depleting antibodies and a reduced white blood cell count.

“Whilst we recognise the risk to infected children, we often forget the potentially serious consequences of children infecting their grandparents, who they visit every Sunday, along with dozens of fellow aged-care residents,” he told Hospital + Healthcare.

Twenty years ago, Japan taught us why risk to the elderly should not be forgotten from the debate about childhood vaccines.

In response to widespread community concern about perceived vaccine side effects, Japan abolished its national influenza vaccination program, which had been mandatory for all young children.

In the subsequent years, Japan suffered a deadly outbreak and a major increase in hospitalisations of its elderly citizens from the virus.

Professor Petrovsky reminds us that those untrained in the medical field may not be aware of the concept of “herd immunity”.

“As we know, no vaccine is perfect and their success rates depend not just on building antibodies within an individual, but also reducing occurrences of the disease within a community. When we vaccinate ourselves, we are, in effect, protecting those who can’t protect themselves, by reducing the likelihood of exposure,” he said.

“We must also remember that, unlike health professionals, parents often get their ‘facts’ from the media, which can include amateurish or clickbait reports, propagated by those who themselves lack scientific expertise.

“On top of that, the human tendency towards mental shortcuts (heuristics) and resulting cognitive biases can skew people’s perception of this reporting — causing them to attach undue weight to stories which create a stronger emotional response or that have been reported more frequently.

“We do exactly the same thing when we buy a lotto ticket. We focus on the one person who wins and ignore the tens of millions of people who don’t. Statistical outliers may not be representative, but they stand out in the memory far more than they ought to.”

With WHO Chief Dr Tedros Adhanom Ghebreyesus recently declaring that we “should be afraid” of an impending influenza outbreak, the Liberal National Government is taking strides to improve Australia’s herd immunity in a bid to protect elderly and other vulnerable citizens.

Federal Minister for Aged Care and Senior Australians Senator Richard Colbeck told Hospital + Healthcare that his focus is on making both vaccines and information as accessible as possible.

“Vaccine hesitancy in Australia is often based on misinformation, which is why we have supported the national Get the Facts about immunisation education campaign. Recently the Morrison government announced an additional $12 million to be spent over the next three years to expand the reach of the campaign. This is particularly important for older Australians,” he said.

“In addition, the Liberal National Government is investing $446.5 million this financial year in the National Immunisation Program, which provides a free seasonal influenza vaccination to a range of at-risk cohorts, including those over the age of 65. Next year, the government will also make free influenza vaccines available for children aged 6 months to less than 5 years,” Colbeck said.

To bolster these efforts, Professor Petrovsky concluded, “Healthcare professionals owe it to their elders to properly educate patients. Never assume — no matter someone’s age, occupation or seeming intellect — that they are appropriately informed. As humans, we are all susceptible to cognitive biases.”

Measles outbreak in Samoa: a tragic state of emergency

The state of emergency in Samoa is a recent example of how quickly a measles outbreak can devastate communities in regions with low vaccination rates.

In a 13 December press release, the Government of Samoa confirmed 5080 measles cases have been reported to the Disease Surveillance Team since the outbreak started. The actual number of cases, incorporating unreported incidence, is expected to be much higher.

To date, 72 measles-related deaths have been recorded, mainly in children under the age of five.

Enormous pressure is being placed on health services in the country, with 1607 hospitalisations recorded to date.

In response to the outbreak, government agencies and NGOs have delivered a mass vaccination program, which is resulting in a slowing of the number of new cases.