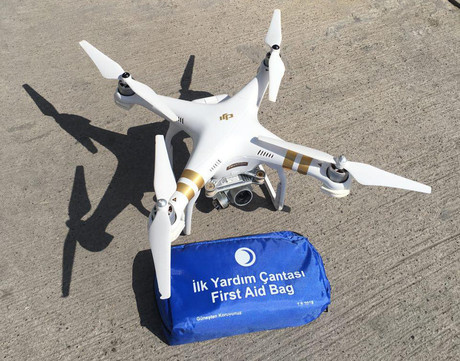 We are entering an era where nearly all electronic devices will be connected to the internet. The looming introduction of the 5G network will lead to connectivity becoming ubiquitous. Devices such as telephones, fall detection sensors and drones can exchange information over high-speed mobile networks to achieve new capabilities. Our research has been exploring ‘the art of the possible’ with networked drones and smart fall detection sensors.

Panic alarms for the independent elderly are becoming increasingly common. They vary in sophistication but generally rely on the user to activate them. Ideally the device automatically alerts the appropriate source of aid after detecting a range of medical and security situations including falling, wandering and loss of consciousness. Falls are particularly dangerous for the elderly and the fear of falling can be debilitating.

Fall detection is a challenging problem for a computer program. Falls occur in different ways, at different speeds and with different impacts. The behaviour of the person after a fall also varies. Detection accuracy of such diverse situations is a challenge for a wearable sensor, but so are the designs of a comfortable device, battery life and other concerns related to usability.

In our study we focused on achieving the best possible detection accuracy with the longest possible battery life. By monitoring the tilt of the subject and their heart rate, the prototype achieved both goals, with over 99% of fall events detected and battery life expected to exceed a month of continuous operation.

Of course, a device that detects a fall is of little use if it does not have the means to raise an alarm. Networked mobile devices are now ubiquitous, so we chose a suitably small and low-power module to give our fall detector the ability to send an SMS. Rather than being active all the time, the networking service was only enabled when a fall event was detected. The location of the fall was automatically recorded by a global positioning system module and included in the SMS requesting an emergency medical response.

Finally, there was the problem of how to respond to a fall event. The conventional response might be an ambulance, which was our first thought. Yet an ambulance is comparatively slow as it navigates traffic and roadworks. Having moved the request for aid into the digital domain, the ability to have machines communicate with other machines to automate and hasten the response was a logical next step.

Modern drones can interact directly with computers and telephones — they are fully automated and many are highly reliable. Drones can avoid collisions with obstacles and the ground both through pre-loaded digitised elevation maps and from onboard sensors. Flying in the relatively uncluttered space below manned aircraft and above the roofline, drones are not affected by city traffic.

Indeed, the drone was substantially faster than an ambulance through cities such as Baghdad, Mosul and Erbil in Iraq. With the support of the authorities it was possible to stage time trials between ambulances and the drone. We found that the drone arrived at the scene 90 to 120 seconds faster than the ambulance. This was a commercial drone, designed and configured for general applications. A drone customised for speed, range and automatic loading of a first-aid kit could easily deliver in half the time of an ambulance in these scenarios.

In our study we tested the ability of the drone to arrive at the scene of the fall — we did not attempt to achieve a medical intervention.

The light weight of the drone makes it justifiable to risk use over a built-up area, but lack of carrying capacity limits the options. In the medium term, administration of oral and injected medication by the drone, or an automaton carried by the drone, appears to be achievable.

In the immediate term, items such as defibrillators and EpiPens can be carried, but will be of most use if there are bystanders. Although difficult to quantify, the drone appearing at the side of a typically anxious subject is likely to be a strong indication to them that help is coming and that they will be found. Video from the drone at the scene of the fall would assist access planning by the medical response team and would allow time criticality of the response to be gauged.

The possibilities of using drones are exciting, yet we need to remember they were primarily developed for military surveillance. The internet also started as a military command and control network. The recent decision by the Australian Government to exclude certain foreign-made infrastructure from the pending 5G network can be understood in the context of this application.

Beneficial technology, such as this application for the elderly, will be totally network dependent and a third party with control of key infrastructure in the network could survey every home in Australia as the price of being part of the modern age.

Elderly people are already prime targets for email scams. Advances in artificial intelligence may make it practical for a malign machine presence in the network to listen to every word, look at every event, learn weaknesses, steal money, rift relationships and ultimately take lives. Security and sovereignty of infrastructure is key to Australians safely enjoying the benefits of advanced networked medical technology.

We have shown the benefits of the concept, yet as with all technological developments, from the iPad to the aeroplane, there is a gap between something that demonstrates the concept and something in which one would wish to fly. Our study achieved drone delivery under special permission for research purposes.

In general, drones are highly regulated, with many safety hurdles to be overcome before they can be used at will over cities. Work continues around the world to make drones safe and to create rules that ensure that their economic potential can be exploited. Despite challenges, drone delivery is steadily becoming a reality in urban areas.

Drones, robots and artificial intelligence will appear in new and surprising combinations in many roles. Often human needs will drive innovation, whether it be the growing demographic of active elderly or the delivery of blood by drone to remote mountain clinics. Drones and robots are the arms and legs of the artificial intelligence systems that will make increasing inroads into health care in coming decades.

The work of Professor Chahl and his research team at the University of South Australia is published in the journal Sensors.