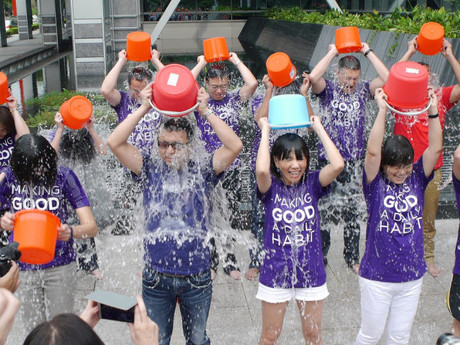 When a person is diagnosed with motor neurone disease (MND), it’s a race against time.

There is no cure.

The lack of an effective treatment haunts sufferers, but now, after 10 years of work by researchers at the University of Melbourne, Bio21 Molecular Science and Biotechnology Institute and the Florey Institute of Neuroscience and Mental Health, a human trial for a drug that could fight this devastating disease has begun. 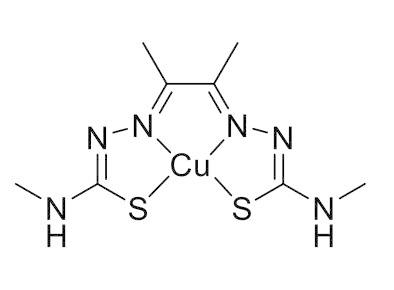 The chemical structure of Cu(-ATSM).

This high-stakes research to create a treatment for such an unforgiving disease is thanks to a collaboration between three scientists — Associate Professors Kevin Barnham, Anthony White and Paul Donnelly — who have been the driving force behind this discovery.

Cu(-ATSM), the drug to treat MND, entered phase I clinical trials at Macquarie University in November. But before it could reach human trials, there was years of hard work, Associate Professor Barnham said.

“The initial focus of our work was on Alzheimer’s disease where it was thought that copper drove the formation of amyloid plaques. We reasoned if you could just remove this copper you could eliminate plaques, and you’d have the solution,” Associate Professor Barnham said. And so research focused on reducing plaques.

“Then we thought, perhaps it’s the other way around? Maybe cells are expelling the copper and so we’ve actually got a situation of copper deficiency. So, what happens if you deliver the copper back?”

“I had made 35 different copper compounds, which I gave to Kevin and Tony to test,” Associate Professor Donnelly said.

For Alzheimer’s disease, the compound was Cu(-GTSM). As it is stable in biological systems, and cell permeable, it can cross the blood-brain barrier and then release copper.

“This gave us the perfect way to test the effect of copper, because we had a perfect control in a related compound, Cu(-ATSM) that, under normal conditions, does not deliver copper,” Associate Professor Barnham said. Equipped with the two compounds Cu(-GTSM) and Cu(-ATSM), the team began conducting their experiments.

“These have been among the most satisfying experiments I’ve ever done,” Associate Professor Barnham said. “At this time, Tony and I were part of a National Health and Medical Research Council program grant team, and this flexible funding allowed us to take a few risks and try things that we would not otherwise have done.”

MND, also known as ALS in the United States, affects about 2000 Australians, including former Melbourne Football Club coach Neale Daniher, who has been public with his diagnosis and battle. Approximately two MND sufferers die every day.

Across the world in 2014, the hugely successful ‘ice bucket challenge’ raised much-needed awareness and money for research.

Following the copper lead, the team tried Cu(-ATSM) in models of both MND and Parkinson’s disease and it worked brilliantly in both models.

“The compound has neuroprotective properties, which is useful when targeting neurodegenerative diseases; but there are other properties about this compound that we need to learn more about,” Associate Professor Barnham said.

Many others played major roles in the project, including Dr Peter Crouch from the School of Biomedical Sciences, who is the driving force behind much of the University of Melbourne’s recent work in MND.

The seeds of this remarkable collaboration between this group of chemists, neuroscientists and clinicians were sown in 2004, when Associate Professor Donnelly was finishing his postdoc at Oxford University and figuring out his next move.

After reading about the work of Melbourne chemist Tony Wedd on metal biology, and Kevin Barnham and Frances Separovic’s work on brain plaques and copper in Alzheimer’s Disease, he decided: “I need to go to Melbourne to work on metallobiology.”

That same year Associate Professors Barnham and White were discussing their scientific frustrations at a lack of progress in Alzheimer’s disease.

“This is when Tony Wedd introduced me to Paul,” Associate Professor Barnham recalled.

“Within six months of arriving in Melbourne, Kevin briefed me on his work and MND, and I introduced him to a family of compounds and we haven’t looked back since,” Associate Professor Donnelly said.

After confirming that their potential treatment for MND and Parkinson’s disease achieved spectacular success in preclinical MND models, the group set up a company and went into business with haematologist-oncologist Craig Rosenfeld, whose company, Collaborative Medicinal Development Pty Ltd, licensed the drug’s intellectual property and has made significant investments to test safety and toxicity, and to develop good manufacturing processes for the production of the drug.

“You need a believer and Craig Rosenfeld got the science — he reads all our papers,” Associate Professor Donnelly said.

Both patients and researchers are hopeful. However, the issue of funding remains a sticking point for essential future research.

“We are just scratching the surface of the mountain of compounds Paul has developed,” Associate Professor White said. “If we have one drug in clinical trials from the first 20, how many more potential clinical drugs exist in Paul’s library of hundreds?

“The compounds are there, the knowledge to investigate is there, the techniques exist, we just need funds for researchers to do the work.”

*By Florienne Loder, University of Melbourne. First published on 1 February 2017 in Science Matters.